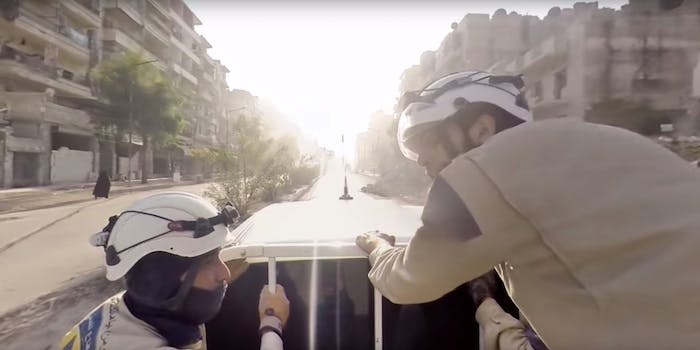 Go behind the scenes on one of the most dangerous jobs in the world.

It’s been called the most dangerous job in the world.

Every day there’s the risk of deadly air attacks and sniper fire. Bombs reduce entire neighborhoods to rubble, killing thousands. But when the bombs hit, a courageous corps of volunteers rushes in to save lives.

They’re called the White Helmets. Before the Syrian Civil War began five years ago, they were everyday people: bakers, students, carpenters, and engineers. Now they are ambulance drivers, paramedics, first responders, and search and rescue squads, digging through the destruction for survivors, sometimes using nothing more than their bare hands.

Russian and Syrian forces drop hundreds of bombs every day in Syria, resulting in the deaths of an estimated 470,000 Syrians since the war began. Against such huge figures, the White Helmets might seem small. There are only around 3,000 volunteers in their ranks. And yet, since the war’s inception they have managed to save over 62,000 lives.

In addition to the myriad hazards of rescue work, a sinister new evolution in warfare tactics has made things even more dangerous for the White Helmets. The Russian Air Force and Syrian Arab Air Force have allegedly taken up the practice of so-called “double-tap” strikes, wherein they bomb a target once and then wait for first responders to arrive on the scene and then bomb it again, apparently targeting rescue workers and medical personnel. An estimated one in six volunteers have been killed or wounded by these types of strikes, resulting in the deaths of approximately 130 White Helmets since the war began.

It’s a story that demands to be told: one of ordinary civilians, putting everything on the line to help others. And now, their story is being told like never before.

A groundbreaking VR documentary experience from Samsung, VICELAND, and Smart News gives viewers a glimpse of what it’s like on the ground from the first-person perspective of the White Helmets. This third installment of Beyond the Frame, a VR documentary series, takes an in-depth, immersive look at the extraordinary heroism of the White Helmets against the backdrop of the Syrian Civil War.

Watch The White Helmets and explore the work of these everyday heroes for yourselves.