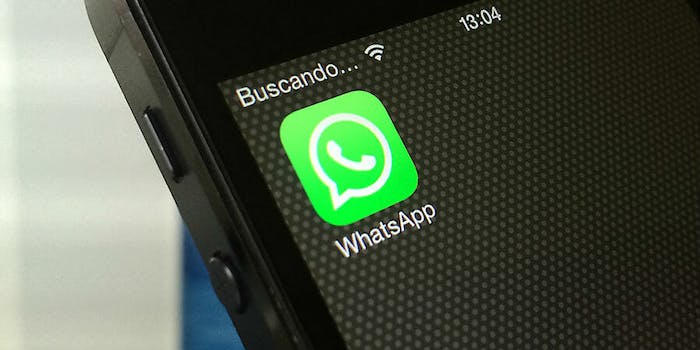 Victims are advised to scan their devices for malware.

No, WhatsApp isn’t going back to subscription fees. If you paid for one, you probably handed your personal information to a group of scammers.

A WhatsApp scam that surfaced last year sends a text message to users asking them to click on a link so they can continue using the instant messaging service. Some have reported receiving it in an email or in a message from the app itself. If a user clicks the link, they get prompted to input personal information and payment details, including their credit card number.

I've just had a text from "Whatsapp" saying my subscription has expired and I need to click a link to renew it. Scam, right?

@WhatsApp I just had a text from you guys saying i need to pay 0.99 is this real?

“Your subscription has expired. To verify your account and purchase a lifetime subscription for just 0.99 GBP simply tap on this link,” the text reads.

@WhatsApp Are starting to charge for your app now? Got text saying about 0.99p subscription see screen shot. Has anybody else had this? pic.twitter.com/rYeYy7KFM5

So far, it appears the scam is limited to users in the United Kingdom, where 76 percent of adults between the ages of 18 and 29 use the app. Whoever created the scam is taking advantage of WhatsApp’s defunct subscription model. The company previously asked its 1 billion monthly users to pay a $1.00 annual subscription fee. Longtime users of the Facebook-owned app may remember those times and be less skeptical about the company bringing it back.

Even more concerning is the potential for hackers to infect your device with malware after visiting the unverified webpage. ActionFraud, the United Kingdom’s national fraud and cybersecurity center, sent an official warning to delete the text. It also recommends that anyone who opened the link run antivirus software to clean their device of potential malware.

If you receive a message asking you to pay for WhatsApp, whether by text, messenger, or email, delete it immediately.