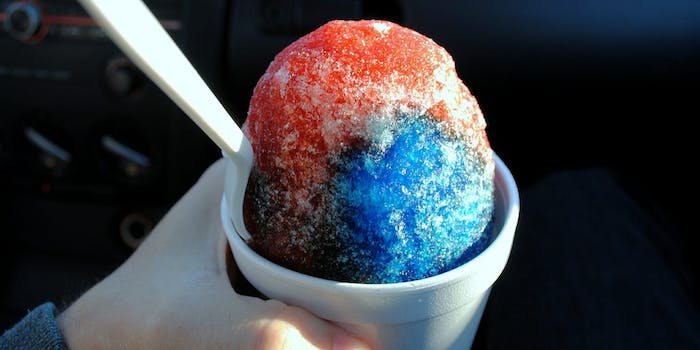 What is the House Freedom Caucus, and why should you care?

A group of nearly 40 Republicans in the House have proven themselves to be a powerful force.

If you don’t know what the House Freedom Caucus is, now’s a good time to learn.

During the House Freedom Caucus’s nearly year-long existence, the group of nearly 40 Republican lawmakers have delayed major pieces of legislation, revolted against the GOP establishment, and played a key role in House Majority Leader Kevin McCarthy (R-Calif.) abandoning his bid for Speaker. The ragtag crew of conservatives have caused Speaker John Boehner (R-Ohio) countless headaches since banding together in January to vote against him in the speaker’s election.

A House Freedom Caucus staffer told The Daily Dot that the group meets once a week, sometimes more, when the House is in session.

“House Freedom Caucus is a place to have open debate on issues in order to work with colleagues in the conference to advance the conservative priorities of the American voters,” said the House Freedom Caucus staffer, who asked not to be named. “The group wants regular order in Congress that benefits the voters they represent, not Washington insiders and the government-big business relationships.”

Why is the House Freedom Caucus a big deal right now?

HFC’s announcement that they were endorsing little-known Florida lawmaker Rep. Daniel Webster (R-Fla.) for speaker and not McCarthy, the establishment favorite, came the day before House Republicans were supposed to announce their nomination. McCarthy announced he was stepping down the very next morning. Why? The House Majority Leader told reporters that he didn’t want to divide the party. A widely-criticized interview in which he linked Hillary Clinton‘s low poll numbers to the ongoing investigation of the House Select Committee on Benghazi didn’t help, McCarthy added.

But the loss of 40 votes from the HFC was a fatal blow for McCarthy’s run for speaker; large enough to derail a successful vote on the House floor. McCarthy needed a majority of the House, or 218 votes to become Speaker. Without the HFC’s support that number would drop to 207, and that’s assuming that every Republican outside the group voted for him. But according to the Wall Street Journal, McCarthy dropped out of the race in order to avoid being co-opted by the HFC.

In exchange for their support for McCarthy, the Freedom Caucus, according to WSJ, wanted more of their members on the House Rules Committee. The powerful panel decides whether bills are open for amendment on the House floor. Webster, whom the caucus is backing for speaker, was a member of House Rules before being stripped of his assignment by Speaker John Boehner (R-Ohio) in January. HFC also wanted their head, Rep. Jim Jordan (R-Ohio) to be Majority Leader, not Rep. Steve Scalise (R-La.), who as current Majority Whip would be next in the order of ascension.

“It was only going to get worse,” McCarthy later told WSJ. “You’ve got the debt ceiling coming up, and everything else. This was for the good of the team.”

Most recently, Jordan recently told Fox News that the Freedom Caucus would be open to Rep. Paul Ryan (R-Wisc.) as speaker. Given the fact that the popular head of House Ways and Means Committee is being asked by both House Speaker Boehner (R-Ohio) and McCarthy to step up to the plate, this is a rare example of HFC agreeing with GOP leadership.

But being “open” to a candidate as speaker is a far cry from an endorsement, and Ryan has said, time and again, that he’s not interested in the job. Given the ongoing status of the House leadership reshuffling, this probably won’t be the last we hear of this mysterious faction of House Republicans. Here’s everything you need to know about the House Freedom Caucus.

What are the origins of the House Freedom Caucus?

The House Freedom Caucus, which first formed in January 2015, is a group of an estimated 37 rank-and-file House Republicans lead by Rep. Jim Jordan, a former chairman of the Republican Study Committee (RSC). According to National Journal, a group of dissatisfied RSC members formed the HFC because they felt the organization had lost the focus of its original mission: to stir up House leadership. Once seen as an enclave for young, GOP firebrands and upstarts to unite against the party’s establishment, the RSC, in some eyes, had sold out.

First formed in 1973 as “a place for conservatives to call home”, the RSC’s original members were once a minority within the House GOP as its most far-right contingent. The RSC’s oldest members considered Richard Nixon and Gerald Ford as “too liberal” and its founders went on to create the Heritage Foundation, a think tank devoted to conservative causes. Fast-forward to present-day, and the RSC has blown up to more than 170 members in 2015, reflecting the record-breaking number of Republicans in the House. By comparison, the RSC only had 15 members in 1995. Some members of RSC complained to National Journal that the group had become “too unwieldy” due to its large size.

Another breaking point was last year’s election of Rep. Bill Flores (R-Texas) as RSC chairman, over which many conservatives were furious. The Texas lawmaker, who announced a bid for speaker on Monday, is seen by his party’s most conservative wing as being too willing to work with, rather than challenge, GOP leadership. Flores has taken a more moderate approach to chairing the RSC, ruling out government shutdowns and high-profile floor fights. He spoke of working to reach a compromise with both GOP leadership and Senate Democrats on a budget deal, an issue that all three groups have sparred over in the past.

Rep. Mick Mulvaney, who lost to Flores in the chairman race, hinted at the formation of HFC following his loss. “I think there may be room for the HFC and something else,” Mulvaney told Politico.

Some members of the House Freedom Caucus, such as Rep. Raul Labrador (R-Idaho) decamped from the RSC. Others, such as Jim Jordan and Reps. Justin Amash (R-Mich.) and Mark Meadows (R-N.C.) remain a part of the RSC.

What does HFC want in the next speaker of the House?

They want a lot of things, but it mostly boils down to having more control over the processes of the House.

Politico published a list of questions that the HFC drafted for potential speaker candidates. Potential speakers were asked how they would ensure conservatives had “appropriate” representation in the Republican Steering Committee, which helps pick the committee chairs, as well as all House committees.

Another question asked what the candidate would do if a conservative member voted against the Republican party’s wishes. Retaliation is obviously an HFC concern. HFC member Rep. Mark Meadows (R-N.C.) was stripped of his chairmanship of the Government Operations subcommittee after voting against a rule to bring the Trade Promotion Authority to the House floor, according to Roll Call. A group of three HFC members were also booted from the House Whip team after the trade vote.

In short, HFC wants the next speaker to put more conservatives in high-profile positions in Congress, and they want protection from recourse if they split with mainstream Republicans on a vote.

The HFC also wants a Speaker that will commit to passing all 12 appropriations bills, but with one huge, rather unrealistic caveat; that they do not contain funding for Planned Parenthood, Obama’s executive order on immigration, the Iran deal, and the Affordable Care Act (Obamacare).

Who is Rep. Daniel Webster?

The HFC endorsed Rep. Daniel Webster for speaker. A member of Congress since 2010, Webster was booted from the Rules Committee earlier this year after running against Boehner for speaker. Webster garnered a mere 12 votes in that decision.

“It’s not like it’s punishment being taken off the Rules Committee,” Webster told Roll Call. “A lot of people would say it’s actually a relief.”
Prior to serving in Congress, Webster spent nearly 30 years in the Florida Legislature. He attended Georgia Tech and is a distant relative of Daniel Webster, the famous senator and secretary of state from the mid-1800s. Webster is a member of the House Committee on Transportation and Infrastructure, serving on the Highways and Transit and Railroads, Pipelines and Hazardous Materials subcommittees.

Where does HFC stand on NSA surveillance or cybersecurity issues?

While the HFC may be united in their desire to defund Planned Parenthood or unseat Boehner, differences crop up on NSA surveillance and cybersecurity. A HFC staff member confirmed that the caucus had no official stance on either cybersecurity or the National Security Agency’s activities, though several of its members are active in both issues.

HFC member Rep. Justin Amash (R-Mich.) is a staunch critic of NSA surveillance, but he voted against the USA Freedom Act, a bill he helped draft, writing on Facebook that the legislation was “weakened behind the scenes.” But not all HFC members joined Amash in opposing the bill; a total of 11 voted in favor, including Rep. Brian Babin (R-Texas), who praised the legislation for ending NSA’s bulk collection program without inhibiting investigations by law enforcement. A controversial cybersecurity bill that passed in the House in April, known as the PCNA, had the support of 7 HFC members.

The HFC’s lack of engagement on tech issues can be seen on multiple fronts. The caucus has no website, and it has historically to released statements through Chairman Jordan’s personal House office site. This week, however, the HFC made some headway online, launching both a Twitter account and a Facebook page.

Correction: The House Freedom Caucus is made up of an estimated 37 representatives.

Photo via Sean Loyless/Flickr (CC BY 2.0)