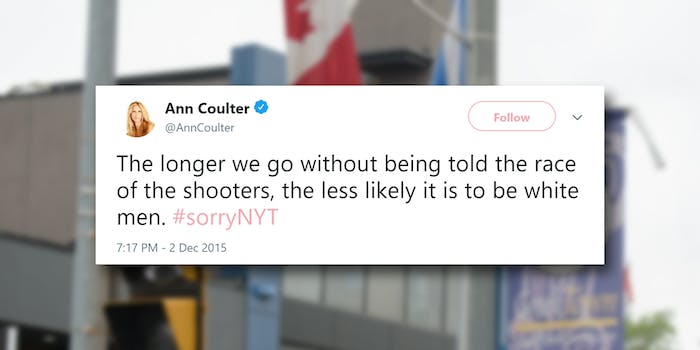 Does this old Ann Coulter tweet explain the response to the Toronto shooting?

Here's why the far-right is obsessed with it.

On Sunday night, a gunman opened fire in Toronto, Canada’s Greektown, killing two and injuring 13 others. He was then killed in a firefight with police officers.

As news of the shooting spread, posters on r/The_Donald, Reddit’s Trump supporting forum, were writing about one thing: Coulter’s Law.

What is Coulter’s Law?

When the shooting suspect was identified later on Monday as Faisal Hussain, the swarms on the far-right hive thought they had all the proof they needed. So what is Coulter’s Law and how does it apply here?

Coulter’s Law stems from an old tweet from far-right online personality Ann Coulter, who believes that police and the media are less likely to swiftly identify a suspect of a public crime if that person is of Muslim descent.

The tweet stems from the belief on the right that the media loves to cover mash shootings by white men, to prop up their anti-Second Amendment agenda, but are less likely to swiftly identify a person with a Muslim name, because of an inherent fear of linking Muslims to acts of terror.

Because this was a shooting committed by a Muslim man, Reddit felt it proved the rule.

The movement also jumped to Twitter, where some took offense to the characterization Toronto police used, that the shooter suffered from a mental illness.

Next you are going to tell us guns are not responsible for the shooting, because guns are illegal in Toronto, right ?

I wish I could have your simplistic, naïve worldview.

They knew from the start!

It’s not really based in anything other than narrative belief. The time it takes to identify a suspect varies and is largely dependent on police releasing that information to the media.

Whether it’s verifiable is dubious. In instances like the two terror attacks in New York City this past year, the suspects, both Muslim, were identified within hours.

But what Coulter’s Law does comport with is the belief those on the right have of how the mainstream media cover acts of violence.

At the top of r/The_Donald this morning was this flowchart explaining how the media responds to terror attacks.

If suspects are white, the media is ready to jump on it. Although, according to the chart, they are reticent to cover Islamic terrorism.

It dovetails with a sentiment expressed by the president when, on the campaign trail, he railed against people refusing to say “radical Islamic terrorism.”

And despite numerous instances of the media covering all those instances supposedly never covered in the chart, the belief among conservatives that this is the case is unshakeable.