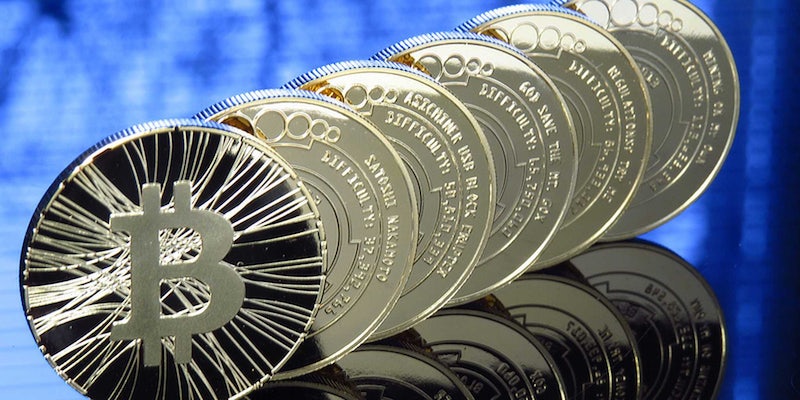 What happens to dead bitcoins?

Bitcoin's a vulnerable currency, one that relies on the safety and proper functioning of the hard drives and storage devices.

Bitcoin watchers everywhere let out a guttural sigh of pity when they heard the story of James Howells earlier this month.

Howells inadvertently threw away $7.5 million worth of Bitcoin when he tossed out an old hard drive containing 7,500 units of the online cryptocurrency. The Welshman had purchased them back in 2009, shortly after bitcoins were introduced, for less than $6. Now he’s kicking himself while digging through a British landfill.

What makes Howells’s story particularly painful is that that Bitcoin is designed to be a finite economic resource. Its anonymous creator(s) have programmed Bitcoin to self-generate new units of the currency at a gradually decreasing pace during the coming years. Once 21 million bitcoins have been virtually minted, there will be no more. That means the 7,500 bitcoins tossed out by Howell can never be replaced.

His plight isn’t as unique as it first seems, though. There are numerous circumstances under which bitcoins can be permanently lost. It’s a vulnerable currency, one that relies on the safety and proper functioning of the hard drives, servers, and other storage devices on which Bitcoin wallets are kept. Likewise, if access to a Bitcoin wallet hasn’t been accounted for, the death of an owner could result in the accidental forfeiture of a Bitcoin fortune.

“It’s impossible, really, to know how many bitcoins are gone forever,” said Sarah Meiklejohn, a computer science researcher from the University of California at San Diego. “They look no different than any other bitcoins that have gone dormant.”

Given Bitcoin’s publically visible blockchain, it’s easy to tell the last time a particular Bitcoin was used in a financial transaction. But there is no way to tell if a dormant Bitcoin is just being saved or if it’s out of circulation entirely.

“I can’t look at a block chain and tell you if this Bitcoin is gone completely from the market or it’s being stockpiled somewhere,” she said.

And stockpiling is a common part of Bitcoin economics. Major exchanges like Mt. Gox and Bitstamp hold massive Bitcoin reserves in “cold storage,” loaded onto some sort of offline storage devices and kept in a physically secure location. That keeps them safe from online threats while they are not being used. Other private Bitcoin owners may store their coins similarly, treating them more like an investment than a currency.

Even if it’s impossible to tell just how many bitcoins are gone forever, economist can speculate on the impact to the larger economy.

Bitcoin is what’s known as a deflationary currency. Unlike most inflationary currencies issued by governments—such as the euro or the dollar—bitcoins don’t get replaced and added to overtime. In that way Bitcoin is more analogous to a commodity like gold, something of which there is a finite and absolute amount.

Many economists and financial experts are wary of deflationary currencies and their propensity toward being hoarded. Assuming Bitcoin can continue to be seen as a valued commodity, it’s purchasing power can only go up the longer it’s held onto by investors. This year alone, the value of Bitcoin has risen from less than $10 to more than $1,000. But even has the purchasing power goes up, the larger Bitcoin economy itself may suffer.

Researchers from the Palo Alto Research Center at the University of California at Berkeley warn that the disappearance of bitcoins from the market—whether through stockpiling or outright loss—decrease liquidity. That means fewer bitcoins being used in transactions, which may make it difficult to create an active and streamlined medium of exchange for online financial transactions.

“Because of their appreciation potential, bitcoins will tend to be saved rather than spent,” the U.C. Berkley research team wrote in its paper, “Bitter to Better — How to Make Bitcoin a Better Currency.”

“As hoarded bitcoins vanish from circulation, transaction volume will dwindle and block creation will become less proﬁtable (fewer fees to collect). If circulation drops too much, it can precipitate a loss of interest in the system, resulting in ‘bit rot’ and veriﬁer dearth, until such point that the system has become too weak to heal and defend itself.”

For that reason, the researchers suggest creating a Bitcoin-like currency with a “decentralized inflationary feedback built-in.”

Though there is no denying Bitcoin’s tendencies toward deflation, it doesn’t have to be a bad thing. Defenders point out that bitcoins are designed to be divided to the 8th decimal place, so that smaller chunks can be meaded out into the economy. And some economists note that a little bit of deflation can be good for economy. As Wired points out, some economist invoke the Friedman Rule, named for economist Milton Friedman, which calls on financial regulators to enact interest rates that prevent inflation from decreasing the value of money that is not spent.

Still other Bitcoin backers say it’s too early to be worrying about the potential deflationary problems. With rapid price fluctuations and encroaching government regulation still a threat, CoinDesk’s Daniel Cawrey claims there are more immediate threats to Bitcoin’s survival.

“It’s more likely that price volatility is more of a threat than deflation to bitcoin right now,” Cawrey said.

Not that that’s any comfort to Howells right about now.