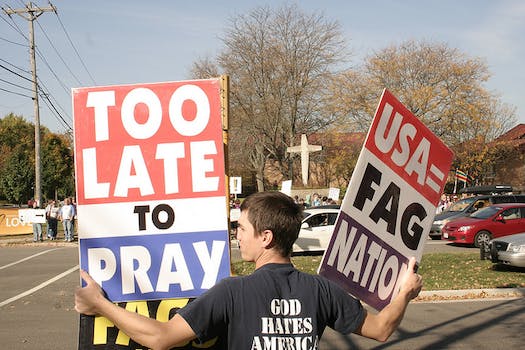 In the debate over gun control reform, there's at least one thing that everyone seemingly agrees upon.

Now, the White House’s most popular online outreach tool may force the White House to take a definitive stand on arguably the most-hated group in the country.

A recently posted petition to legally classify the Westboro Baptist Church as a hate group has quickly become the most-signed petition in the 15-month history of the We the People program. Initiated shortly after the Sandy Hook Elementary School shooting when the Westboro Baptist Church threatened to picket the funerals of the young victims, the petition has gathered nearly 270,000 signatures. That’s roughly 70,000 more signatures than a separate petition calling on President Barack Obama to “Immediately Address The Issue Of Gun Control Through The Introduction Of Legislation In Congress.”

The White House has yet to respond to the petition, though its policy is to address any petition that garners more than 25,000 signatures.

The Westboro Baptist Church of Topeka, Kan., gained infamy during the wars in Iraq and Afghanistan for its practice of protesting the funerals of fallen soldiers. Under the leadership of Fred Phelps and following fringe Calvinist Doctrine they’ve called “Primitive Baptist,” they claimed the soldiers’ deaths were God’s punishment for America’s tolerance of gays and non-Christians. Since then, the group has also taken to protesting other high-profile funerals, such as the Aurora movie theater shootings this past summer.

Although the petition doesn’t clearly outline what the hate group designation means, existing federal hate crime legislation requires the Department of Justice and FBI to compile a list of all organizations that are engaged in or advocate crimes motivated by discrimination. The FBI’s list is not published but is intended to help monitor threatening groups. If designated a hate group, it could mean stiffer penalties for Westboro Baptist Church members if they are ever convicted of a crime.

Although the debate on gun control and school safety after Sandy Hook has been vitriolic and divided, most social media users were unilaterally in favor of the effort to have the Obama administration officially brand the Church as a hate group and end tax-exemptions and other special protections they currently enjoy as a religious institution.

Many simply retweeted the link to the We The People Petition with the phrase “Legally recognize Westboro Baptist Church as a hate group.” Other’s were sharper in their opinions.

“[D]o we have to recognize them at all? Can’t they just quietly slip back beneath their white sheets again (aka KKK)?,” wrote @k_flyMN on Twitter.

Although the Obama administration has yet to act on the Westboro Baptist Church, the Supreme Court has already ruled that the group’s protests are protected under the First Amendment.