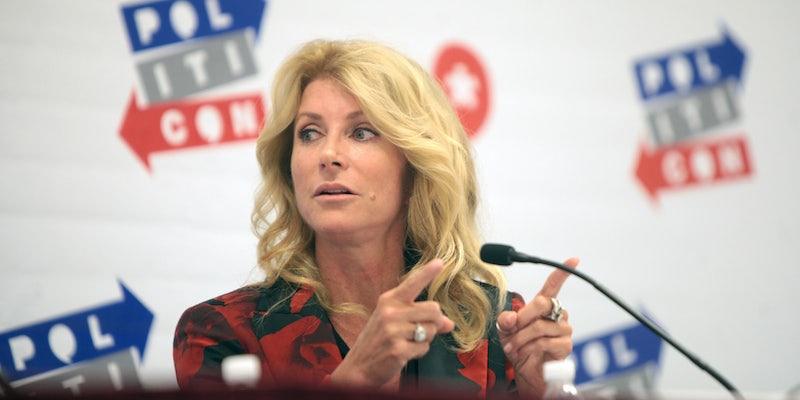 Wendy Davis, the former Texas state senator and gubernatorial candidate, announced on Monday that she is running for Congress in 2020.

Davis, who captured attention after she filibustered for 11 hours straight in 2013 in protest of an anti-abortion bill, will seek to unseat Rep. Chip Roy (R-Texas).

“I’m proud to announce my campaign for Congress in TX-21!” Davis wrote on Twitter. “I’m running to be a voice for every Texan who feels forgotten by a broken political system. Time to make DC listen – will you stand with me?”

I’m proud to announce my campaign for Congress in TX-21!

I’m running to be a voice for every Texan who feels forgotten by a broken political system. Time to make DC listen – will you stand with me? ✊ >> https://t.co/JD1wMnMvPe pic.twitter.com/Btlq6zI5tv

In her campaign announcement video—which mostly touches on her history—Davis said she is running because “people’s voices are still being silenced” and for “our children and grandchildren, so they can live, and love, and fight for change themselves.”

Roy narrowly won Texas’s 21st Congressional District during the 2018 midterms, getting 50.2 percent of the vote against his Democratic challenger, Joseph Kopser, who finished with 47.6 of the vote. Davis will be a challenger in 2020 with more name recognition.

In 2015, Davis launched Deeds Not Works, a nonprofit that helps young women “disrupt the status quo through organizing, policy-making, and voting,” according to its website. She ran for governor in 2014 but lost to now-Gov. Greg Abbott (R).