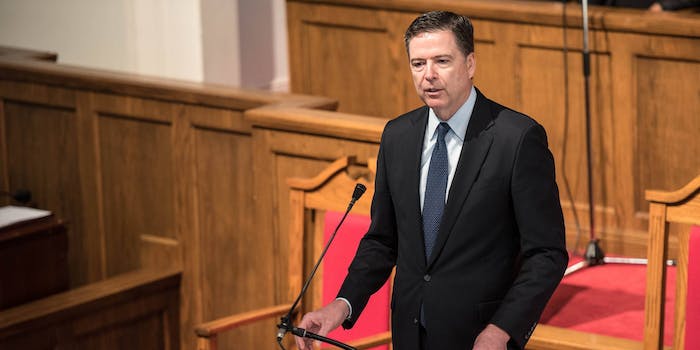 'I thought your job as FBI Director was to protect me.'

In an open letter, the young woman whose sexually explicit online conversations with disgraced former Congressman Anthony Weiner ignited a national firestorm blasted FBI Director James Comey for his role in politicizing her plight and subjecting her to unwanted scrutiny from the media.

“I am the 15-year-old (now 16) who was the victim of Anthony Weiner,” the woman wrote in a letter published by BuzzFeed. “I now add you to the list of people who have victimized me. I told my story originally to protect other young girls that might be a victim of online predators.”

The woman, whose identity media outlets have kept hidden in an effort to protect her privacy, recalled how, not 10 minutes after she concluded a seven-hour interview with FBI agents regarding allegations that Weiner broke the law in sending her sexually explicit electronic messages, she received a phone call from a reporter asking about 2016 Democratic presidential nominee Hillary Clinton.

Weiner’s estranged wife, Huma Abedin, is a close adviser to the former secretary of state. When law enforcement officials confiscated Weiner’s computer as part of their investigation, they reportedly found emails potentially related to Clinton’s use of a private email server during her tenure leading the State Department.

Earlier this year, Comey had recommended not pressing charges against Clinton. However, when Comey sent a letter to members of Congress last week about the emails, he brought renewed attention to the issue mere days before the election—even though the FBI had no knowledge about the actual content of the email, nor had the agency even obtained a warrant to read them at the time the letter was sent.

In her letter, the woman insists the renewed attention has led to reporters scouring her neighborhood, asking people for details about her personal life.

“I thought your job as FBI Director was to protect me. I thought if I cooperated with your investigation, my identity as a minor would be kept secret. That is no longer the case,” she wrote. “My family and I are barraged by reporters’ phone calls and emails. I have been even been blamed in a newspaper for causing Donald Trump to now be leading in some polls and costing Hillary the election.”