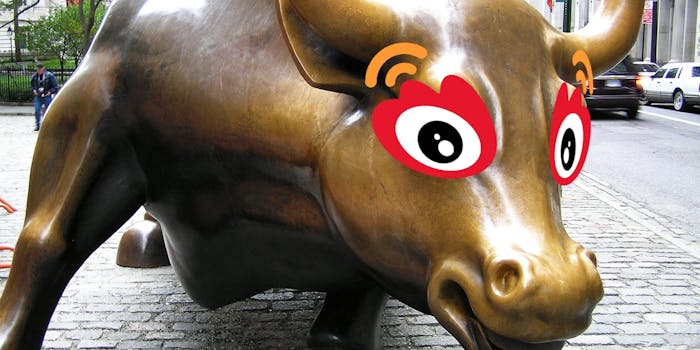 Like Prince, Ron Artest, and Cat Stevens, popular Chinese microblogging site Sina Weibo has decided it’s time for a name change as it embarks on a new chapter. It will now be known simply as Weibo, which translates roughly to “microblog” in Chinese. The company, which has 129.1 million active users, is getting ready for a $500 million initial public offering in the U.S.

Weibo is owned by the Sina Corporation, a large Chinese media company that has already gone public. According to Bloomberg, Weibo will repay loans to Sina with some of the money used from this filing.

Going public may raise Weibo’s international profile; although the app’s popularity is largely confined to China, the newly-christened Weibo has users accessing its platform from 190 countries; however, that doesn’t mean the company has its sights set on global usage. In its F-1 filing, the company repeatedly describes itself as a distributor of Chinese-language content, and there’s no indication that Weibo plans to veer into competition with U.S.-based social networks like Facebook and Twitter; in the filing, Weibo described its plan for growth as centered around growing its mobile base, but also around increasing penetration within China, particularly within what it calls “less-developed, lower-tier cities.”

So Weibo, although it is readying for a U.S. IPO, doesn’t have designs on English-speaking users. What Weibo does want, quite emphatically, is to dominate the Chinese social market. Its name change signals a cutthroat attitude toward competitors like Tencent Weibo, because it implies that when you think of a microblog, you think of its service.

Weibo reported promising growth, but warned investors that it does not know if it will continue to receive the same level of support from parent company Sina after it becomes a standalone company. It also emphasized that it relies on China’s state-owned internet infrastructure.

“Effective bandwidth and server storage at Internet data centers in large cities such as Beijing are scarce,” Weibo wrote. Not explicitly mentioned: How government censorship might impact the Weibo brand.