'I was raised to believe that we are all each other's brother and sister.'

In an open letter to Trump posted on his Facebook page, the Academy Award-winning director of Bowling For Columbine and Fahrenheit 9/11 slammed the fear-mongering of the real-estate heir and recalled a nearly 20-year-old meeting with Trump that called into question the reality TV star’s toughness.

Moore wrote that, back in 1998, he and Trump were scheduled to appear together as guests on a talk show. While sitting in the green room prior to going on air, Moore writes, a producer from the show pulled him aside and noted that Trump was nervous that Moore would light into him during the taping.

And so, as you may remember, I did. I went up and introduced myself to you. “The producer says you’re worried I might say or do something to you during the show. Hey, no offense, but I barely know who you are. I’m from Michigan. Please don’t worry — we’re gonna get along just fine!”

You seemed relieved, then leaned in and said to me, “I just didn’t want any trouble out there and I just wanted to make sure that, you know, you and I got along. That you weren’t going to pick on me for something ridiculous.”

“Pick on” you? I thought, where are we, in 3rd grade? I was struck by how you, a self-described tough guy from Queens, seemed like such a fraidey-cat.

You and I went on to do the show. Nothing untoward happened between us. I didn’t pull on your hair, didn’t put gum on your seat. “What a wuss,” was all I remember thinking as I left the set.

Moore went on to contrast his own experience with Trump with the businessman’s tough-guy posture against Muslims in America. “And now, here we are in 2015 and, like many other angry white guys, you are frightened by a bogeyman who is out to get you,” he wrote. “That bogeyman, in your mind, are all Muslims. Not just the ones who have killed, but ALL MUSLIMS.”

“I was raised to believe that we are all each other’s brother and sister, regardless of race, creed or color,” he continued. “That means if you want to ban Muslims, you are first going to have to ban me. And everyone else. We are all Muslim.”

Moore clearly meant that last sentence to be iconic. Immediately prior to penning the letter to Trump, Moore wrote “We are all Muslim” on a placard and stood in front of Trump tower until his was escorted away by police. 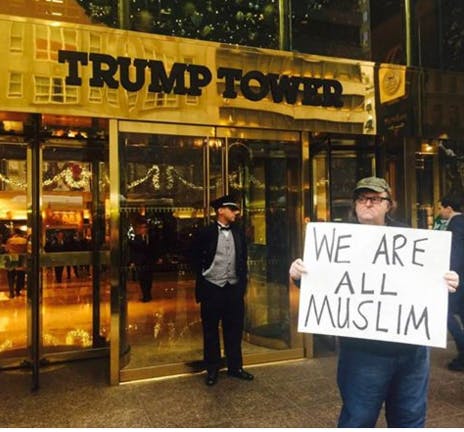 Moore directed people to a page on his website where they can sign a petition protesting Trump’s call for a ban on all Muslims entering the United States. He also called for spreading the protest to social media with the hashtag #WeAreAllMuslim.

"Just as we are all Mexican, we are all Catholic & Jewish & white & black" @MMFlint pic.twitter.com/leAGlEg7jk

I hope #WeAreAllMuslim takes off. Best way to help @realDonaldTrump is to show how utterly delusional and self hating the Left has become.

@realDonaldTrump If you hate one, you hate all. I can't wait for the American people to finally say "Donald, you're fired." #WeAreAllMuslim

This protest isn’t the first time in recent days Moore has attempted to rally like-minded activists in a social media protest against Trump. Earlier this month, he urged people upset with Trump to report the GOP front-runner’s Facebook posts for violating the social network’s rules regarding hate speech.

Moore also has a movie to promote. His newest film, a travelogue about progressive policies enacted by other countries he argues that the United States should adopt, is called Where To Invade Next and is slated for a Dec. 23 release.