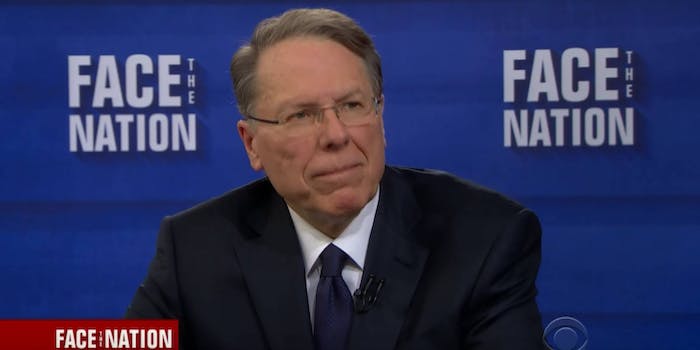 The NRA won't change it's stance based off Trump's opinion, either.

The public face of one of the most powerful lobbying groups in all of Washington, D.C. sat down for a nationally televised interview on Sunday morning.

It should come as no surprise that, even in the aftermath of the grisly mass shooting at the Pulse gay nightclub in Orlando a week ago, LaPierre rallied against recently proposed gun control reforms. It’s far from the first time LaPierre has been called on to fight gun reform proposals hot on the heels of a horrible national event: he did the same after the 2012 Sandy Hook Elementary School shooting in Newtown, Connecticut, when he largely deflected blame away from guns, and onto mental illness and violent video games.

The interview started off with LaPierre framing the terms of the conversation, focusing on what he called a “terrorist challenge where they’re on the verge of overwhelming us.” He went on to argue that President Obama and the “whole gun ban movement” were miscasting a terrorism issue as a gun issue. Neither President Obama nor any prominent Democrats have proposed banning all guns outright for the record, although an assault weapons ban has seen some backing.

“What happened this past week is the President, the whole gun ban movement, said ‘hey, don’t look at terrorists, look over here, divert your attention, take your eyes off the problem,’ because they don’t want to face the embarrassment of their failure in this terrorist area, and they want to cover their butts and not talk about it.”

Dickerson interjected to nudge LaPierre back towards the issues at hand; specifically, the effort by senate Democrats to pass legislation blocking people on terrorism watch-lists from buying guns.

Senate Republicans thwarted a bill that would’ve achieved this back in December, following the deadly San Bernardino mass shooting. LaPierre insisted that he’d “never seen so much misinformation and poorly researched stories” as he has about the watch-list issue. He continued:

“What happens on the watch-list? People forget, law enforcement set it up, just the way they wanted it, federal law enforcement. NRA didn’t take the guy’s name off the list, the federal government did, FBI did, largely because of some of these politically correct policies that I think I’ve been talking about earlier.”

LaPierre’s argument is that federal law enforcement doesn’t want to halt gun sales to people on watch-lists because they want to observe them going forward to help build cases. It is notable, however, that this watch-list issue is an area where the NRA has adopted a more conciliatory stance than usual, perhaps due to the negative connotations of being “soft on terror.”

The NRA’s stated position from its official website praises Republican senator John Cornyn’s watch-list bill, which is less comprehensive and aggressive than those proposed by senate Democrats. LaPierre referenced Cornyn’s bill while talking to Dickerson, too.

“Anyone on a terror watchlist who tries to buy a gun should be thoroughly investigated by the FBI and the sale delayed while the investigation is ongoing.  If an investigation uncovers evidence of terrorist activity or involvement, the government should be allowed to immediately go to court, block the sale, and arrest the terrorist,” the statement reads in part.

Additionally, while Democrats have viewed the Orlando shooting as primarily an issue of guns and anti-LGBT hatred, the GOP has tried to cast it as a cut-and-dried case of religiously motivated terrorism (an angle that CIA chief John Brennan has cast some serious doubts on).

It’s the latter position that LaPierre was clearly taking, so Dickerson challenged him, asking “aren’t people just trying to figure out why people should be able to have access to weapons that produce bullets so quickly, and maybe we should do something to curb that? That sounds like a human reaction.”

LaPierre could not be deterred, however. He continued to insist that the Orlando shooting had far less to do with guns than terrorism, and characterized efforts to pass gun control laws as futile. He described it as being like “trying to stop a freight train with a piece of kleenex.”

It’s unclear whether LaPierre or his organization will ever be swayed by the pleadings of presumptive Republican nominee Donald Trump. The real estate magnate commented this week that he wanted to talk to the NRA about barring gun sales to people on terrorism watch-lists. Even though public opinion is overwhelmingly on the side of new restrictions on guns, the NRA maintains that its stance has not changed.