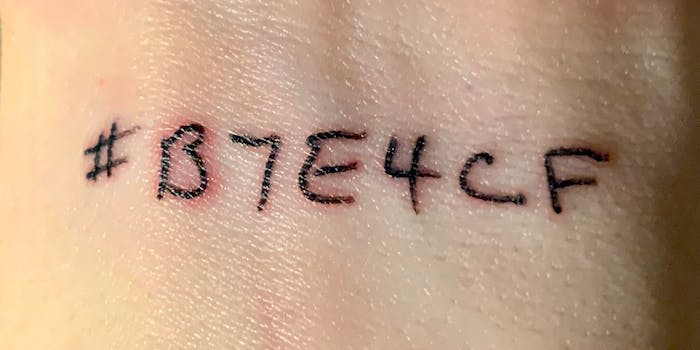 The staffers now say they will 'take steps to modify' the tattoos.

At least two former staffers for Sen. Elizabeth Warren’s (D-MA.) campaign for president are coming under fire for getting tattoos to remember the campaign by that unfortunately and inevitably bring to mind numerical identification tattoos used on Jewish prisoners of the WWII concentration camps.

One of the primary signifiers for Warren supporters on Twitter throughout her campaign has been a uniform Twitter profile picture or “avi” style that staffers and fans adopted to show their support for the former presidential candidate.

The avi style consists of a grayscale profile photo of someone paired alongside a light green background. This specific hue is known as Liberty Green and the hex code for this color is #b7e4cF.

Now, former Warren staffers are immortalizing this aspect of the campaign with tattoos on their arms of the hex code in Elizabeth Warren’s handwriting. “First campaign, first tattoo,” wrote Eric Ziminsky in the accompanying caption to an image of his tattoo.

The problem? The resulting tattoos are eerily reminiscent of identification numbers tattooed onto prisoners of concentration camps during the Holocaust.

The bigger problem? It would be somewhat excusable if those getting the tattoo hadn’t considered this unfortunate allusion, but apparently they knew this similarity would come up and chose to get the tattoos regardless. “It’s her handwriting and my partner is Jewish. I’m so, so sorry it feels that way for you but I promise I thought about that and chose placement so it wouldn’t be seen on the outer arm,” wrote Raquel Breternitz in response to criticism.

Although some will insist on arguing semantics, the comparisons and criticisms regarding this incident are wholly valid regardless if the tattoos are oriented horizontal rather than vertical as they typically were on prisoners of the WWII concentration camps.

At the time of publication, both individuals who are confirmed to have already gotten the Warren tattoo, Raquel Breternitz and Eric Ziminsky, clarified that they would “take steps to modify the tattoo” in response to the feedback they received.