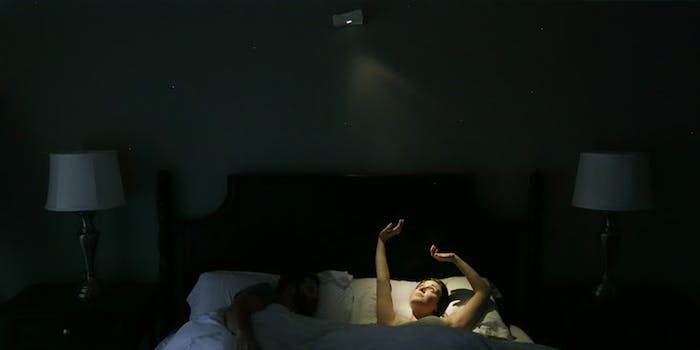 Sleeping next to Wakē, the alarm clock of the future

You can sleep, but you can't hide.

“The smartphone is awesome, it’s a fantastic device, but the alarm clock feature is like an afterthought,” says Will Russell. Russell is the founder of Lucra Labs, the company behind a device called Wak?. Wak? basically wants you to hate mornings a little less.

“We’re in love with our smartphones, but in couples therapy with our alarm clocks. They’re so terrible and no one expects anything better. Like waking up to a machine should be terrible, but we have these other examples where machine interactions with smartphones are quite nice, and fun, and enjoyable. We haven’t come to expect that yet from how we start the day, but why not? How you start the day is probably one of the most important interactions.”

In an effort the change that, Russell and his team began exploring a better way to wake up. They honed in on parametric speaker technology, which allows highly focused sound instead of an all-over wave. They paired that with a warm, white LED that gradually increases in intensity. The device doesn’t live on your bedside table, but instead installs over the top of your bed like a smoke detector. It finds you in your bed and wakes you with a combination of targeted light and sound. (Before you get too worried about Big Brother, the Wak? doesn’t use a camera to find you.) 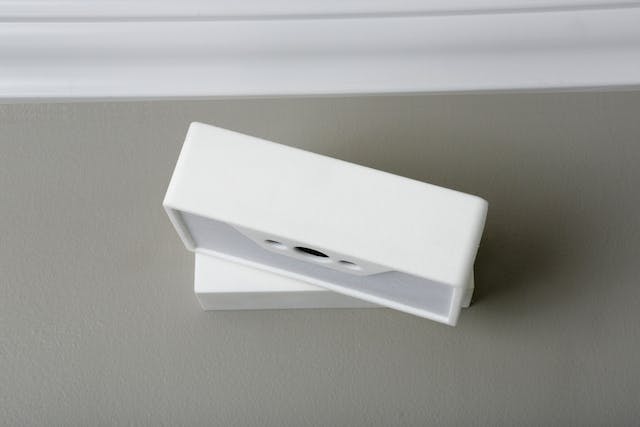 “We started right before christmas 2013, all of 2014 was development,” said Russell. “It started off painfully slow. We were just looking for ways to identify people in bed. We knew we didn’t want to use a camera. We started looking at rangefinders to see if there was some way we could create topographical profile of the bed to look for lumps.”

Unfortunately, blankets rumpled by sleep can create weird paths, and people often sink into their well-worn mattresses. The company turned to IR instead, which Russell says can pick people out individually “even when [they] are snuggled close together.”

The company launched a Kickstarter to fund the project. The team felt the reimagination of alarm clocks would have an emotional connection with the public.

“We thought, we can go somewhere with an idea, but an idea isn’t very valuable if you don’t have the specifics on how an idea comes together,” said Russell. “At best, you ask for a royalty and hope someone takes the idea and runs with it. We wanted to take it all the way. We wanted to see if we can make this phenomenon where people start ditching their alarm clocks.

It’s eerie, sure, but sort of magical, and much, much gentler than a buzzing iPhone.

“We know there are people out there who hate their alarm clocks, they hate their spouses’ snoozing habits. We needed to tap into that angst through some sort of public channel.”

For now, if you want to experience Wak? for yourself, you have to visit a garage-slash-office in Palos Verdes, Cali. It’s not the perfect test environment, since cavernous cement garages are not where (most) people sleep, but sufficient enough to block out light and show off the device.

In at-home use, you connect the system on your smartphone, telling it what side of the bed you sleep on, and what time you want to be woken up. At that time, the Wak? scans the bed, looking for a heat signature. It begins slowly increasing in light in a focused beam, while playing audio—in my case, birds chirping—directed at you. When you’re laying next to another person being woken by Wak?, you can barely hear anything, but when you’re the one being woken, it’s as if the birds are chirping inside your head. It’s eerie, sure, but sort of magical, and much, much gentler than a buzzing iPhone. 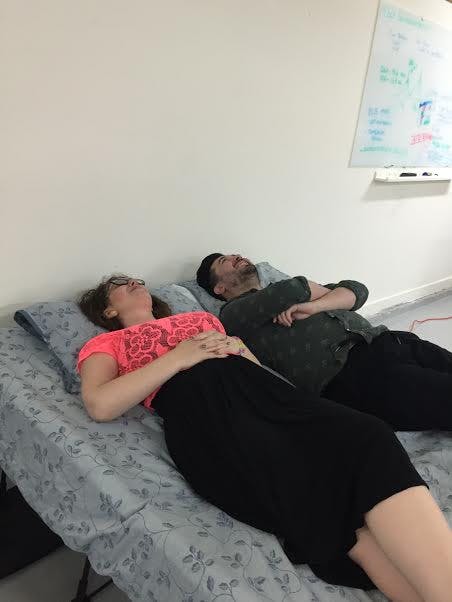 The device had some trouble picking up my heat signal over my friend’s, but I am also constantly colder than everyone around me. (I’m possibly a vampire—which fit in well with the giant, coffin-like wood box dominating half of the garage.) Testing the parametric speakers here revealed just how targeted this technology can be. If you listen at one end of the device, you can easily tell how just a few degrees of change in direction of the speaker can affect the intensity of sound, and how the person next to you could easily ignore your own targeted alarm.

If you buy in via Kickstarter, a first-generation device costs $249. They’re 77 percent of the way to the goal with more than a month to go, so the team is already looking at what’s next, working with a product design to move forward, and continuing to lay the groundwork for production. Then the team will look for “the right Angel investor” to help them make the next leap.

“We want someone who does the Internet of Things, or who does home innovation. More than just bringing money, they could guide us through the manufacturing process and integrate with the greater ecosystem of things that are out there.”

There are some restrictions on the product at the moment. For those who like to wake up to music, the speakers work better with simpler audio files like birds chirping. Also if you sleep with more than two bodies in the bed, that can be a problem. 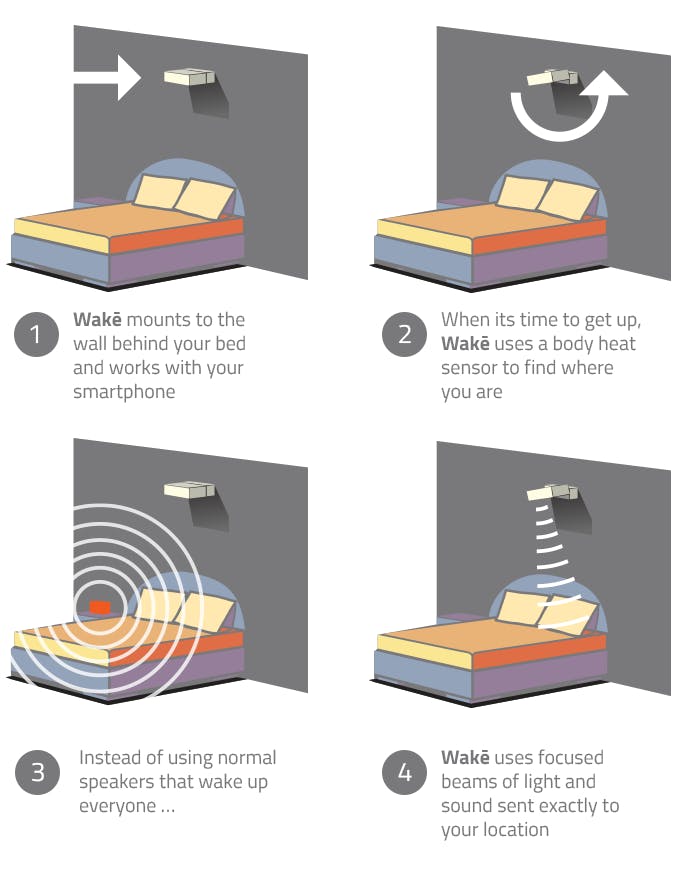 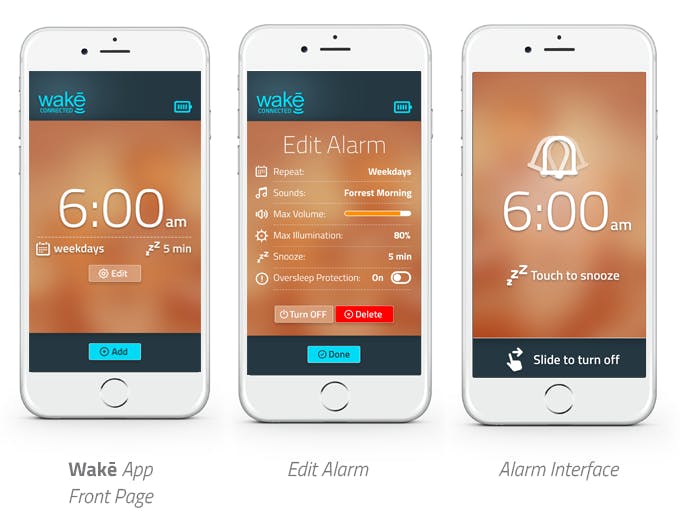 “A few of the more interesting questions have to do with the number of people who have pets that crawl up with them in bed, or kids,” Russell explained. “We have to tell them, if your pets are on your pillow that might be problematic. For many reasons!”

Still, it’s a hard sell. Most of us wouldn’t buy a basic alarm clock or a fancy alarm clock; we’re content relying on our smartphone’s built-in app. But that doesn’t mean we’re happy with it, and perhaps the idea of a high-tech, better version will lure us in.

“80 percent of millennials have smartphone alarms,” said Russell. “People have been overwhelmingly supportive and saying that they hate their current alarm. They’re on their last rung, they’ve tried everything.”

Still not sure about Wak?? That’s fine; just sleep on it.