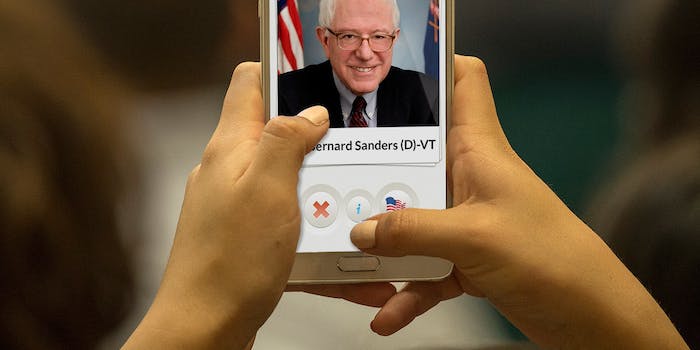 Tinder users have a new app they can swipe and match.

What if picking the next president of the United States was as easy as finding a new fling?

Voter, a new app for iOS launched ahead of the 2016 elections, wants to make that a reality.

The app allows users to swipe through the candidates and learn about their policy stances, speeches, and track records. It also tells users which political party might be the best fit for them based on each potential voter’s interests.

Voter has different levels of questioning. On level one, users are asked simple questions about their social, environmental, and economic beliefs: the minimum wage, the death penalty, and legalizing marijuana, for example. Users can click on pictures for more information on each issue to find who’s in support and who’s opposed.

Level two moves into more specifics. Users are able to swipe through issues like taxing wealthy Americans and building a fence at the Mexico-U.S. border. They’ll choose their views and get matched with the appropriate candidate and party.

“In the last national election, only one in three people who could vote, did,” Voter’s promotional video explains. “Today’s average attention span is 8 seconds, 1 second less than a goldfish, and political information rarely makes the cut.”

If Voter can find even a fraction of Tinder’s success, it could make a dent in voter turnout. According to USA Today, Tinder has helped nearly 3 billion meet up using the online dating app, with nearly 1.6 billion swipes and 26 million matches each day.