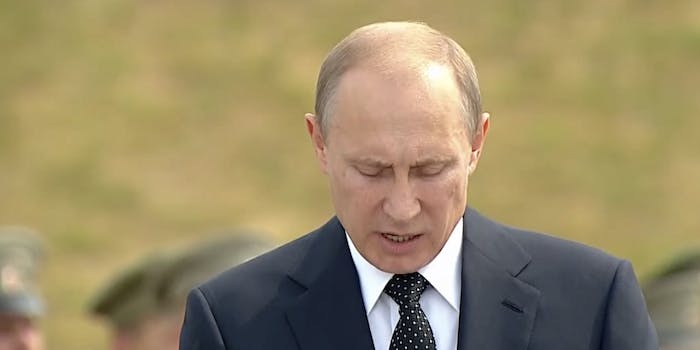 No sooner had we learned that Russian President Vladimir Putin was the victim of an avian fecal bombing campaign than we found out it was all a sham. Where’s nature’s call when you need it?

Putin, in fact, gave a galling speech about peace and the limits of violence at the opening of a World War One memorial without having his suit soiled by a bird, as we’d been led to believe:

Here’s the original footage—the supposed protest would have occurred shortly after the nine-minute mark. (Or maybe it did, and this is the altered video? Choose your own conspiracy!)

In any case, let’s have a moment of silence—first of all, for those who have needlessly died in war; secondly, for the viral video that was too perfect to be real; and finally, just in case this is a double-reverse hoax, for the brave bird that was no doubt shot and stuffed shortly after making its political convictions known. May it serve as a symbol of the courage the rest of us lack.