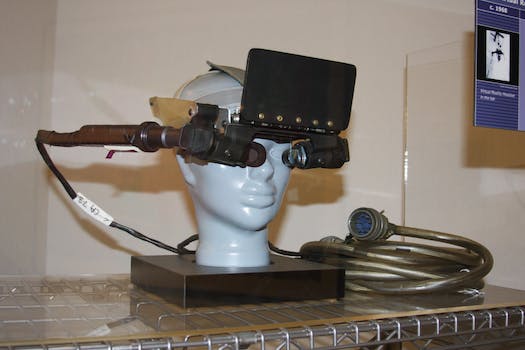 It's used to assess sex offenders' probability of reoffending, and it's essentially an Oculus Rift meets penile polygraph.

The University of Montreal has developed a new, highly technologically advanced system (not pictured above) to determine whether sex offenders are able to control their sexual impulses. The system combines virtual reality technology with a “penis ring” that measures the subject’s arousal, in response to such stimuli as images of women and children. Happy Tuesday, everyone!

The Mirror reports that Massil Benbouriche, a professor at the University of Montreal’s school of criminology, invented the system to assess whether sex offenders are likely to reoffend. The system incorporates a pre-existing, controversial technique called “penile plethysmography,” which involves outfitting a patient’s penis with a sensor-equipped “ring” and presenting him with visual and auditory stimuli—in this case, images and video of young women and children—to assess their state of arousal.

Penile plethysmography isn’t just used to assess sex offenders: It’s also used by physicians to help diagnose and treat sexual conditions like erectile dysfunction. But Benbouriche took the technique one further by administering it in a cube-shaped “vault,” creating an all-immersive virtual reality experience. Because sex offenders often try to throw the results of penile plethysmographs by averting their eyes from the content onscreen, Benbouriche’s virtual reality system uses “eye-tracking” technology to ensure that the person inside the booth is keeping his eyes fixed on the images onscreen.

Last year, a New York federal appeals court ruled that one convicted sex offender did not have to undergo the procedure, calling it inhumane and “extraordinarily invasive.” (There are also obvious ethical issues with using images of children as sexual stimuli for pedophiles, though if the image used in the University of Montreal press release is any indication, the images will be animated, and will not portray actual women or children.)

Furthermore, it seems like a pretty big leap to equate a sex offender having an erection in response to simulated sexual stimuli with their being able to exercise self-control in such a real life situation. In light of the fact that many experts on pedophilia believe that sexual attraction to children is a fixed and immutable sexual orientation (and that a sizable number of them will never touch a child), it’s unlikely that a self-avowed pedophile would be able to control his biological response to the stimuli onscreen, despite the fact that he might very well be able to control his actions in a real-life situation. Put it this way: If a heterosexual man were placed in Benbouriche’s booth and flooded with images of Kate Upton dancing in a bikini, he’d likely have an erection. But does that mean if he met Upton, he’d be unable to control himself around her? Maybe, but also maybe not.

There’s also the glaring question: If penile plethysmography can only be used on men (or really, anyone with a penis), how does one assess the likelihood of recidivism for the estimated four percent of sex offenders who are female? That’s a question for another time, but Benbouriche is excited about the potential clinical and diagnostic benefits his virtual reality system has to offer.

“We know that virtual reality has been effective in treating various anxiety disorders and phobias and is promising in treating schizophrenia,” says Benbouriche. “Virtual reality may become a frequently-used clinical tool in forensic psychiatry within the next few years, both for judging how dangerous individuals are and for determining their ability to control themselves under various situations tested in virtual reality.”