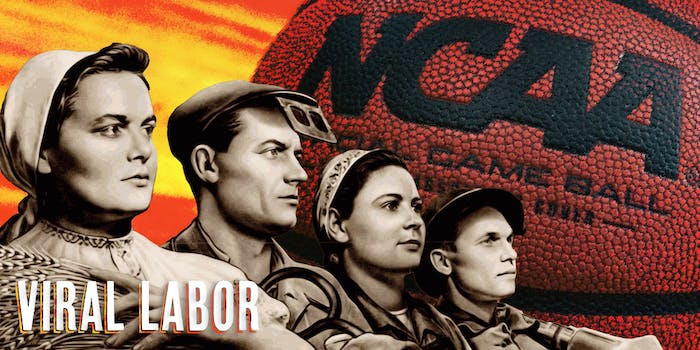 From sponsorships to merch, college athletes can now use their personal brands to monetize the internet

Young athletes no longer have to turn to the big brands for a payday.

During his winter break in 2019, Michael Wong, a pitcher at the University of Texas-Arlington, was hopeful. He’d just attended a Student-Athlete Association Conference for the National Collegiate Athletic Association (NCAA), and a group of students had voted to allow athletes to monetize their name, image, and likeness, known as “NIL.”

For years, athletes, their parents, members of the NCAA, and the greater public had been arguing over the merits of letting students profit off their own fame. But in recent years, there had been some cracks in the NCAA’s walls, including votes like the one Wong participated in.

Then this past June, more than a year and a half after Wong attended the conference, following a Supreme Court ruling, the existing protocols crumpled, and the NCAA created a temporary rule in the students’ favor.

The rule allows athletes to use their NIL to make money, when previously only their programs could profit. And in the age of TikTok, Instagram, and YouTube, young people, and now young athletes, don’t have to turn to the big brands for a payday. They grew up in an era where being online was being your own brand. They’re finding out how that can pay.

“When I voted on it, I didn’t think I’d be a part of it,” Wong said of the change. Following a difficult year of canceled and modified sports, it was a welcome surprise.

What most people don’t realize, Wong said, is that student-athletes spend a lot of time in practice, training, and at games in the hours that many other students hold jobs and internships. And though many athletes try to get sports scholarships, a relative few can grab them. Even fewer attain a coveted “full ride.” Wong’s team, for example, has dozens of players but doles out fewer than a dozen scholarships, he said.

Now, instead of grabbing a dining hall shift after three hours of running laps, under the new rule, athletes can capitalize on the fame and following they already have acquired while playing their sport.

Wong himself hasn’t yet taken advantage of the rule. He hasn’t brokered any deals with sponsors (though he has signed with Barstool Athletes), and he knows he isn’t getting a Raising Cane’s partnership like Louisiana State University’s quarterback. But he believes there will be benefits to the rule for most students who want them.

When the NCAA changed its rules in June, some athletes dropped merchandise and signed brand deals overnight. But others still have to grow their own brand before monetization is possible.

For some players, of course, there will be big money and Wheaties box stardom. The Washington Post reported that Bryce Young, a quarterback at the University of Alabama, could already be making close to seven figures from NIL deals.

“Yeah, I don’t think I’ll be able to get that kind of deal,” Wong said, laughing, but he will pursue some mid-tier companies.

Young athletes can try traditional marketing avenues, but with social media at their disposal, most will turn toward posting advertisements to their Instagrams and sharing discount codes.

These are already well-established routes for accounts that might be popular for music, comedy, or even lifestyle advice. Companies devote a large share of their marketing budgets to paying people with big followings, and that can lead to big paydays for even one sponsored post.

“We already have a couple of freshmen, I’ve seen them post on their stories saying ‘Hey, here’s my code. If you use my code, you’ll get 25% off,’” Wong said.

Ian Gunther, a gymnast at Stanford University, is in talks to make some sponsorship videos for a company, though he would not disclose which one until the sponsorship became official. He did say that it was something of a “fitness movement.”

Gunther already has a TikTok following of more than 124,000, gaining over 6 million likes. Most of his videos show himself or other gymnasts working on their routines.

When he heard about the NCAA rule change, Gunther thought, “It’s about time.” Since then, he’s been fielding requests for sponsorships through the email in his TikTok bio and sifting through old offers he had to turn down in the past.

While Gunther is partially motivated for monetary reasons (he is not on a full scholarship at Stanford), he also hopes that being about to work with companies might also bring more attention to his sport, which he said gets the most attention around the Olympics.

McGovern said his strategy has been to reach out to brands he likes. He doesn’t expect big paydays but is instead looking to get discounts and merchandise in exchange for posting about a brand.

Brown is a much smaller school and has a much smaller football program compared to large, public colleges. For example, Brown’s stadium hosts 20,000 people, while Alabama’s can seat more than 100,000. The difference in school and program size will give some student-athletes a natural boost in following.

McGovern is admittedly not much of an influencer. His Twitter and Instagram following are mostly friends, and his photos reflect his real life, rather than a curated one.

“Most of the brand partnerships have requirements to stay as a brand ambassador, brand athlete,” he said, “so there are some things that I will have to do, like post a story of the brand once a month, or like all their posts.”

Monetizing doesn’t have to mean becoming a corporate pitchman, at least for McGovern, who said he doesn’t see himself substantially changing his social media.

Like Michael Wong, McGovern has signed with Barstool and said smaller companies have also started following him and reaching out with their own ideas.

As more time passes under the new rule and as bigger companies step into the ring to sponsor athletes, especially those at top NCAA schools and in the most popular sports, McGovern believes more people will step in to offer services to help the monetization process. He’s already starting to see companies forming to fill in that role.

Since Barstool President Dave Portnoy announced that he was starting a student-athlete marketing company, thousands have signed on, according to Barstool Athletic’s Instagram. Other companies are moving in on the opportunity, including the merchandising company Fanjoy, which is offering College Athlete Partnerships.

“It’s interesting how quickly it blew up,” McGovern said, and he expects it will only grow much bigger.

Although many athletes and startups are finding a slice of the pie, there is still a contingent of students who can’t yet profit from the rule change.

University of Utah gymnast Sydney Soloski, for example, seems like the perfect candidate for sponsorship with nearly 15,000 following her picture-perfect Instagram and about 70,000 followers on TikTok. She even started a burgeoning YouTube account, where she vlogs.

Though perfectly primed to monetize her social media presence, Soloski is one of many NCAA athletes who isn’t eligible to do so. As an international student from Canada on a student visa, Soloski can’t hold a job in the states and thus can’t profit from the new opportunity.

It’s been tough seeing some teammates and other athletes start to post about their deals. On her team, they’ve established that they will keep their NIL deals to themselves, and won’t discuss them widely with teammates, because there will be students who won’t make much or any money at all.

“As happy as I am for everyone,” she said, “I don’t think it’s fair for the NCAA to say name, image, likeness goes into play, no problem, but you have a percentage of student-athletes literally unable to partake in it.”

Soloski has had several companies, including healthy food and lifestyle brands reach out to ask about partnerships, but she had to turn them all down so far, telling them, “don’t count me out, be patient.”

The rule is only temporary for now. There will be more kinks to work out, whether on a grand scale like Soloski’s and other international student’s immigration issue or interpersonally between companies and students negotiating fair deals.

But many students are grateful to finally have control over their own names, like Wong, who is grateful he’ll get one semester to give the rule a shot before graduating in the fall. “It’s a good step in the right direction,” he said.