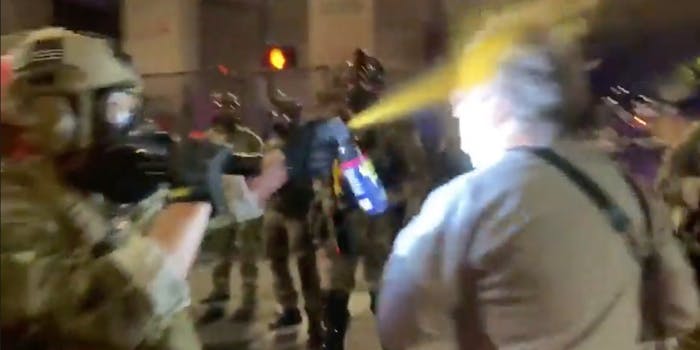 'I took an oath to serve this government, and my government committed atrocities in Vietnam.'

A man believed to be a veteran of the Vietnam War was pepper-sprayed in the face this weekend by federal agents in Portland.

The man, identified as Mike Hastie, was recounting his experience as a combat medic to a line of officers just moments before being the incident took place.

“I took an oath to serve this government, and my government committed atrocities in Vietnam,” Hastie says. “I took the same oath that each and every one of you took.”

While discussing atrocities he witnessed during the war, other officers can be heard approaching Hastie from off-camera.

“I carried a high-powered automatic weapon in Vietnam, and we murdered,” he says. “We did it every day, and your generation doesn’t know that.”

That’s when one officer interrupts Hastie mid-sentence and sprays him directly in the face. Hastie is then shoved several times as the officers begin moving down the street.

Despite being hit by the irritant at close-range, Hastie continues his remarks before the officers leave the area.

“That was a direct spray,” Hastie says.

The footage, captured by video producer Andrew Kimmel, has since been seen over 300,000 times on Twitter alone. The video also went viral on Reddit and received more than 47,000 upvotes on just one post.

The incident is just one of countless shocking moments seen on the streets of Portland as part of ongoing protests following the police killing of George Floyd in late May.

Officers from numerous federal law enforcement agencies were sent to the city by President Donald Trump earlier this month.