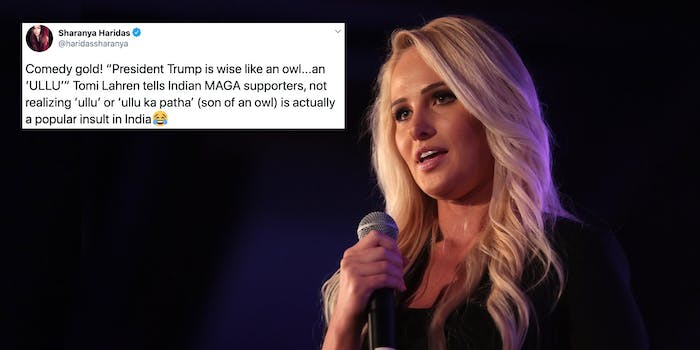 A prankster appears to have hired Lahren on Cameo to make the remark.

While addressing what she believed to be her supporters in India, Lahren described Trump as being “wise like an owl.” Only an owl in Hindi, pronounced ullu, is actually considered an insult throughout Southern Asia.

Not only is ullu an insult, the term can actually be translated to “fool” or even “jackass.”

Hindi speakers all across Twitter quickly began weighing in on the video.

“We all can agree with Tomi that Trump is an Ullu,” @_SJPeace_ said.

So why did Lahren film the video in the first place?

Ali-Asghar Abedi, the Twitter user who first shared the video, has since claimed that he paid Lahren to make the statement after booking her on Cameo.

Speaking with the Guardian, Abedi stated that he hoped the incident would help people understand that “America’s intellectual class has failed.”

“They will say anything for money without doing the due diligence required to offer an informed view,” he said.

Lahren thus far does not appear to have acknowledged the viral clip.