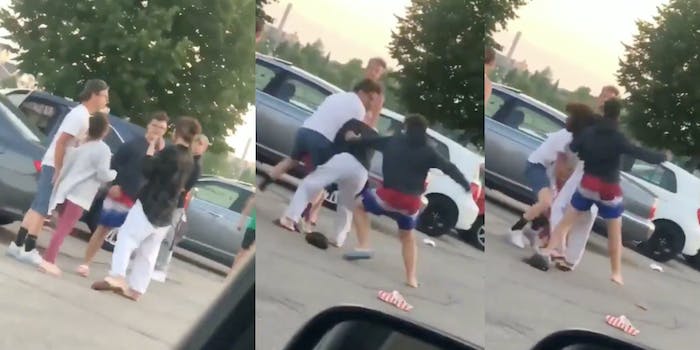 In part two of the video, he gets beat up for putting 'hands on a female.'

Kyle Rittenhouse, the 17-year-old accused of killing two protesters in Kenosha, Wisconsin, is purportedly seen on video punching a girl prior to Kenosha.

In a video that has been shared multiple times across different social media platforms, a boy, who is alleged to be Rittenhouse, is seen with several other boys. They appear to be verbally arguing with at least one girl (there are at least three in the video) before the boy, alleged to be Rittenhouse, strikes her several times while she has her back turned during an apparent brawl that broke out amongst the group.

The fight appears to have started with two girls, who were seen arguing at the beginning of the video. The boy, purported to be Rittenhouse, is seemingly the only boy in the video who got physical. The people recording the video from afar can be heard saying, “He punching a b*tch. … He jumping that b*tch.”

In part two of the video, apparent bystanders get involved, and the boy gets beat up, ending up on the ground. “Why’d you put the hands on a female? … Don’t put your hands on a female,” they can be heard saying to him.

People online began posting the video with the claim that the boy who is seen punching the girl is Rittenhouse. The boy in the video not only resembles Rittenhouse, but online spectators are pointing to the crocs he is wearing as further evidence. In a social media photo that surfaced after the shooting, Rittenhouse is wearing distinguishable American flag crocs while holding an AR-15-style rifle, allegedly the same one used in the Kenosha shooting. In the video, the boy is wearing the same crocs.

Furthermore, a reporter in Wisconsin said in a tweet that the fight occurred on July 1 and that the recorders of the video confirmed to him “that the person in the red-white-and-blue trunks is Rittenhouse.”

In addition to other charges, Rittenhouse was charged as an adult with two counts of murder and one count of attempted murder. He allegedly fatally shot Joseph Rosenbaum and Anthony Huber, as well as seriously injured Gaige Grosskreutz, at a demonstration over the police shooting of Jacob Blake on Aug. 25.

Rittenhouse reportedly used an AR-15-style rifle in the shootings, and he faces charges of possessing a weapon while under the age of 18.