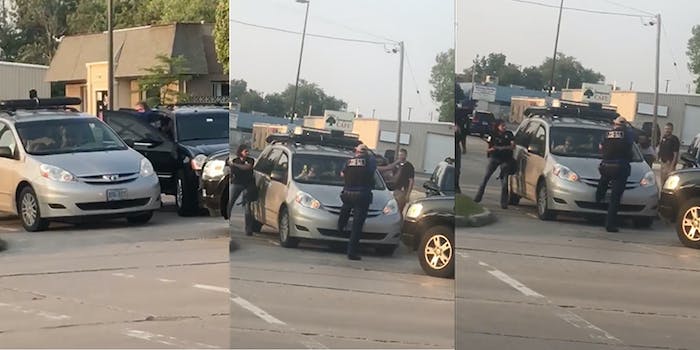 'This is our crew and we know why they were there. To feed people. That's it.'

After mass protests took place in Kenosha, Wisconsin, following the police shooting of 29-year-old Jacob Blake on Sunday night, a viral video captured unmarked law enforcement vehicles swarming a van of people, breaking their windows, and forcefully removing them from the car at a stoplight.

The incident occurred at a Speedway gas station in Kenosha on Wednesday night. The people who were surrounded and arrested in the incident have been confirmed to be crew members of the Seattle-based nonprofit organization Riot Kitchen, which provides free meals for activists and homeless people.

The video which has been viewed and shared over 660,000 times, was recorded by a bystander and originally posted to Facebook on Wednesday.

“Riot Kitchen HQ just learned that our bus crew was arrested in broad daylight in Kenosha today – kidnapped by feds in unmarked vans,” Riot Kitchen wrote in a tweet, along with video evidence of the incident.

Riot Kitchen said in a statement to the Daily Dot that the group of activist cooks were originally on their way to Washington, D.C., to support homeless people and protesters at the “Get Off Our Necks” March with free meals, before finding out about the news of Jacob Blake’s death. Riot Kitchen has served hot food, including vegan and vegetarian dishes, from its food truck at protests and events in Seattle and Portland throughout the year.

Once the group became aware of the situation unfolding in Kenosha, it opted to make a pit stop there to offer support to organizers and civilians on the ground on Wednesday evening.

It wrote that members of the organization were at a gas station getting fuel for their vehicles around 7:30pm when police and state Marshalls suddenly swarmed them in black unmarked SUV’s, as seen in the video. The clip shows police pointing guns at the members in the van, detaining and arresting them, and then driving off with the group in captivity.

“Our ground crew only knew because we saw reports from police scanners about it and we hadn’t heard back from our crew in a while,” wrote a member of Riot Kitchen in a statement to the Daily Dot via DM. “We had no idea who took them or where and it took until early morning hours for us to find any records of where they were taken.”

“We are currently trying to get them out of jail,” the member added. As of now, the organization still has yet to locate all of its members and bail them out.

While the video was spread on social media, many Kenosha residents questioned the motive behind the sudden car raid, with alleged details later being revealed that the group was seen filling gas containers, thus why the police were called. One commenter wrote, “Everyone in Kenosha thinks they were filling gas tanks to start fires… Can we get a real reason as to why?”

As unrest unfolded in Kenosha throughout the week, multiple buildings and areas were set ablaze throughout the city including the Department of Corrections, several local businesses, and homes, according to Fox 6 Milwaukee. During the third night of unrest on Tuesday, a protest turned deadly after 17-year-old Kyle Rittenhouse fatally shot two and injured one with an assault rifle. He is charged with first-degree murder.

In response to the comment, one user wrote, “maybe generators for normal kitchen/mobile food operations.” Riot Kitchen confirmed the suggestion, responding with a comment “yep, exactly that.”

In response to another user asking for more clarification about the story behind the video, Riot Kitchen reiterated that it was simply there to help.

Despite being vocal about the events leading to the forceful arrests of Riot Kitchen members, other users suggested that the arrests were warranted in the protection of Kenosha property and that the organization may very well have been on their way to contribute to the burnings.

As pointed out by GrubStreet, similar incidents of alleged kidnappings of protesters, organizers, and activists via unmarked vehicles have occurred throughout various U.S. cities over the summer, including in Portland and New York City.

The Daily Dot has reached out to the Kenosha Police Department for comment on the incident but has yet to receive a response.