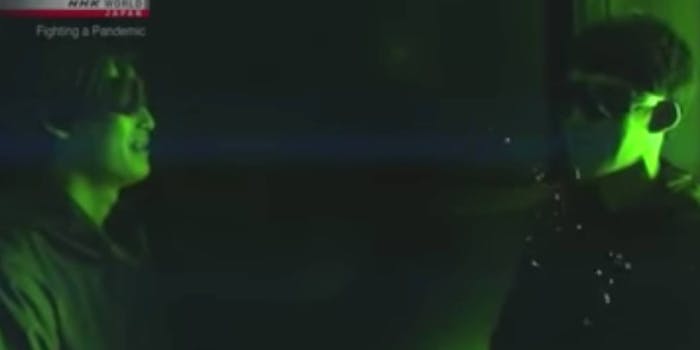 Video shows how ‘microdroplets’ from sneezing, coughing, talking can linger in air

This is why we need to practice social distancing.

It’s widely known that people can become infected with the novel coronavirus by coming into contact with an object that has the virus on it or inhaling droplets emitted by sneezes or coughs.

But some scientists in Japan believe there’s a third infection route: simply having conversations.

Earlier this week, scientists in Japan released video footage capturing microdroplets they believe contribute to the spread of the coronavirus.

Using special “high sensitivity” laser beams and cameras, they captured microdroplets—that are 1/10,000 of a millimeter in size—that are invisible to the naked eye and can be produced by talking or breathing normally.

“It seems transmissions are happening during conversations,” the lead researcher says in the video. “And even when people are standing a certain distance apart.”

To be clear, this doesn’t confirm that COVID-19, the disease caused by the coronavirus, can be transmitted through normal conversations. According to PetaPixel, it’s unclear how much virus someone would need in order to become infected. Each of these tiny droplets would contain far less than the “macro” droplets produced by sneezing or coughing.

In the experiment, a scientist sneezes and people can see the large particles that are produced.

Then, two researchers engage in a close-range conversation. Similar microdroplets are seen. “People generate a lot of microdroplets when they talk loudly,” a narrator in the video says.

That being said, the scientists in the video believe we can’t rule out the microdroplets produced by everyday conversations spreading the virus to some extent.

“Microdroplets carry many viruses,” the lead scientist says. “We produce them when we talk loudly or breathe heavily. People around us inhale them and that’s how the virus spreads.”

The video was captured as a collaboration between Japan’s NHK broadcasting organization and the Japanese Association for Infectious Diseases, PetaPixel reports.