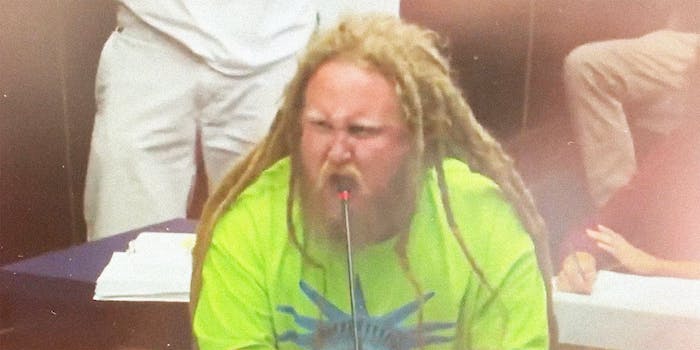 The man alludes that requiring a 'vaccine passport' is akin to fascism.

A viral video featuring a man’s protest against vaccine mandates at a San Diego Board of Supervisors meeting has prompted outrage on Twitter.

“Do you think that the 4 feet of marble that holds you above, high in this chamber, will help you from the fate of humanity which you are unleashing? No, it won’t!” the man yells in a deep growl in the clip. Several others in the room echo him, shouting, “No!”

The man alludes that requiring a “vaccine passport” is akin to fascism.

“Your children and your children’s children will be subjugated. They will be asked, ‘How many vaccines have you had? Have you been a good little Nazi?’” he yells.

The video was shared to Twitter by Phillip Molnar, a Business reporter at the San Diego Union-Tribune, and garnered over 250,000 views.

It prompted backlash from many users on Twitter, frustrated with the man’s opposition to vaccines.

“When the dirt settles on the graves of the children we’re about to sacrifice, let it be known that it was because we let these people decide how we would run our schools. #FreeDumb,” one user said in a quote tweet.

“On so many issues, this country really is beholden to the dumbest fucking people. vaccines just bringing out the loudest rn,” said another.

Others pointed to the man’s dreadlocks for reasoning enough to dismiss his opinions.

“I don’t believe in listening to white people with locks. Under any circumstance. It was fuck this guy before he said anything,” one user said.

However, some quote-tweeted their agreement with the man’s anti-vax sentiments.

While some users jokingly noted that the man looks like far-right radio host Alex Jones with dreadlocks, others couldn’t ignore his WrestleMania-ready voice.

“Why does this guy sound like he’s cutting a wrestling promo,” one user said.