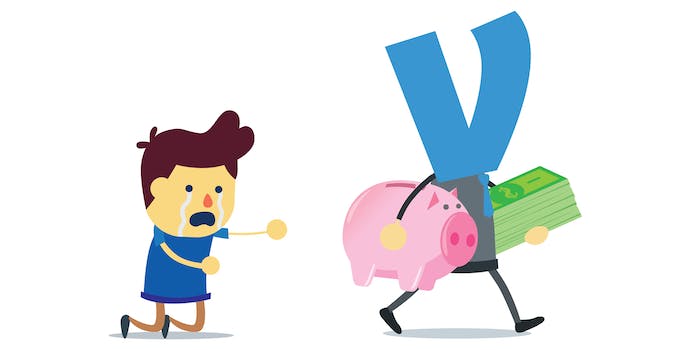 Venmo wants to be an all-in-one bank—will it protect you like one?

Don't put all your eggs in one Venmo basket.

Venmo now has direct deposit and check cashing features along with credit and debit cards. Its advertising is enticing, promising “paychecks can show up in your account up to two days earlier.” But given issues with Venmo’s security and integrity of its product in the past, you might not want to rush to sign up.

The popular online payment system has been positioning itself as a fast and easy way to transfer money since its inception. However, by making it simultaneously quick and seemingly facile to move cash around, Venmo has also made it easier for scammers and hackers to steal from Venmo’s customers. And they can probably be doing a lot more to protect their customers, who they seem to now want to be all-in-one banking clients with them.

This most recent move with direct deposit seems like a clear effort to get customers to do all of their banking with Venmo instead of a traditional bank. Starting in April, Venmo announced a “phased rollout” of direct deposit where people can receive their checks “two days” sooner. The rollout goes hand-in-hand with the Venmo debit card (around since 2018). Also in 2020, Venmo delivered government stimulus checks to people; people could set up direct deposit to receive it or use Venmo to cash the physical check (which waived check-cashing fees). Then, in October, the company released the Venmo credit card, “issued by Synchrony and powered by Visa.”

Even more recently, the company has gotten deeper into the check-cashing game.

But Venmo has run afoul of the Federal Trade Commission (FTC) in the past concerning availability of funds and security. In 2018, the FTC “reached a settlement with PayPal, Inc.” over several issues including “allegations that the company told users of its Venmo peer-to-peer payment service that money credited to their Venmo balances could be transferred to external bank accounts without adequately disclosing that the transactions were still subject to review and that funds could be frozen or removed.”

Meaning Venmo’s fast and simple cash system may make it seem easier for its customers to transfer money, but the service isn’t so smooth behind the scenes.

The 2017 complaint noted that customers have been complaining to Venmo since 2015 (and possibly earlier) that these delays caused financial hardship “including the inability to pay rent or bills with funds they expected to transfer out of Venmo.” For instance, you expected money in your Venmo account to pay your rent on May 1, but the money, although promised to you immediately, is not always there.

While the FTC settled with PayPal (and by extension Venmo, a PayPal company) over these allegations, this more recent push for people to sign up their paychecks to the application seems like a recipe for disaster.

In Venmo’s footnotes and fine print, there is a caveat that early access depends on employers “providing pay information to the bank prior to payday. It may take up to two pay cycles for direct deposit to take effect. Transactions are reviewed, which may result in delays or funds being frozen or removed from your account.” This finer detail is included to give them financial and legal protections. It’s unclear how much more of an advantage using Venmo’s direct deposit system is over an established bank unless you want to integrate all of your banking in one place. Depending on the bank or employer, direct deposits can be “near-instantaneous” to payday, (even showing up at midnight of payday) or one business day with a normal bank.

While Venmo promises that, it doesn’t always back it up. The FTC complaint also alleges that Venmo misrepresented the robustness of its security claiming the application used “bank-grade security systems.” Again, while Venmo settled these allegations with the FTC in 2018, customers are still reporting security issues with their Venmo accounts.

To Venmo’s credit, its direct deposit and check cashing services are FDIC insured, since they are going through established bank partners. Their debit card is partnered through Mastercard, Cirrus, PULSE, and MoneyPass. However, Venmo’s fine print notes that only the direct deposit and check cashing are covered by FDIC insurance; the main use of the app—transferring money between people and companies, is not covered.

Heather found herself the target of a phishing attack in the spring of 2020. Heather used Venmo to receive payments for freelancing projects as well as pay her rent. One day, she was in the process of teaching a class at home during the shutdown when she received multiple missed calls from people purporting to be from Venmo. When she picked up, they told her that her account had been hacked and they just needed information. “They told me I needed to verify a code that they would send to me, so I did that. Then they told me I’d see some notifications from my account as they verified me, but not to worry about it,” Heather said, “That was it. That was the whole phone call. I came away from the call thinking, ‘Oh good thing Venmo is looking out for me.’”

She started seeing notifications come in but they had told her to expect that. She didn’t realize anything was amiss when she tried to log in and was not able to.

“I realized then that I’d been hacked, and that phone call was the hackers themselves. I’d been duped, and I felt really embarrassed about it too,” Heather said. While she immediately changed her passwords and unlinked her account, the hackers had already done a lot of damage. They took all the money that she had in Venmo as well as drained money from her established bank account. She tried to reach out to Venmo and discovered there was no phone number, just an email. “I was panicking and pacing around my apartment, and all I wanted to do was speak to someone. And I couldn’t. A live Venmo help contact didn’t exist,” Heather said. Adding insult to injury, much of Heather’s livelihood was in peril thanks to the shutdown from the pandemic.

Thankfully, Heather was reimbursed by Venmo, which she appreciates. But it’s definitely changed her usage of the application. “After that I mostly stopped using Venmo for transactions, except small ones and now I never ever keep a balance on my account,” Heather said. When asked about setting up two-factor authentication, she said, “I did. But given how easy it was for a stranger to hack my account with EXTREMELY limited information, I still feel uneasy when I use the app.”

However, not all victims of hacking and other criminal activity are recompensated by Venmo.

Last spring, Jennifer had her Venmo Mastercard skimmed at an ATM in downtown Chicago. Even though she called within 10 minutes of the money being taken from her account from a location miles away from her current location, Venmo refused to return the money because “they said the missing money was entirely my fault … [it] put the blame on me immediately for not keeping my PIN secure despite the fact that I physically had the card on me.”

Talking with Lauren Saunders, associate director at the National Consumer Law Center, she makes a distinction between two kinds of accounts. The direct deposit/check cashing accounts on Venmo are FDIC insured but the fast cash accounts, what the application is known for, are not protected in the same way. But because of the way the accounts are now linked, that can cause confusion and concerns.

Saunders noted that Venmo has an obligation to look into your dispute and most likely give money back if you disputed it in a timely manner, provided that the victim had not authorized the transaction. That includes skimming at ATMs. Whether your card’s PIN has been hacked or even if you wrote it on the card itself (which is highly discouraged), the regulation still protects victims, Saunders said. But if the investigation discovers that the victim authorized the transaction, they might not be liable to have their money refunded. She advises people who have difficulties to keep appealing to the application and “people should file a complaint with the Consumer Financial Protection Bureau.”

Which is a huge issue with Venmo, because using the app is an implicit authorization. Scamming is a huge issue on the site. Scammers have found ways to fake accounts and convince people to send them money for goods or donations. Jennie (a different person) reported that she was scammed twice, once for a pair of shoes that never arrived and another time when she gave someone bail money. “In both instances, Venmo told me it was too late to get my money back,” Jennie said.

Unfortunately, victims of these scamming incidents don’t have the same protections that Heather and Jennifer have. Venmo states on its website: “Outside of paying authorized merchants, Venmo is designed for payments between friends and people who trust each other.” However, elsewhere on its website, it talks about using Venmo for business; many people do not know all of their customers in their business and vice versa. Saunders explains it’s a way for Venmo to avoid responsibility for people using its application from getting scammed by saying “We warned you,” while also encouraging people to use their services. She noted that banks and other companies have to make sure that their services are not being used by criminals. But Venmo and other fast money applications do not appear to have the same level of oversight. They do comply with money laundering regulations but are not doing enough to protect their customers from the scammers who take advantage of Venmo’s operations for nefarious purposes.

And now the company wants you to link all your funds to it.

Saunders noted, “all these systems make it really easy to send money” where it is easy to make mistakes, and offer minimal protection if you are defrauded. She believes that government enforcement agencies need to crack down on these practices of Venmo and other fast cash companies that are not taking unauthorized charges and scamming seriously.

Which means you might want to think twice about linking your paycheck to the popular application.