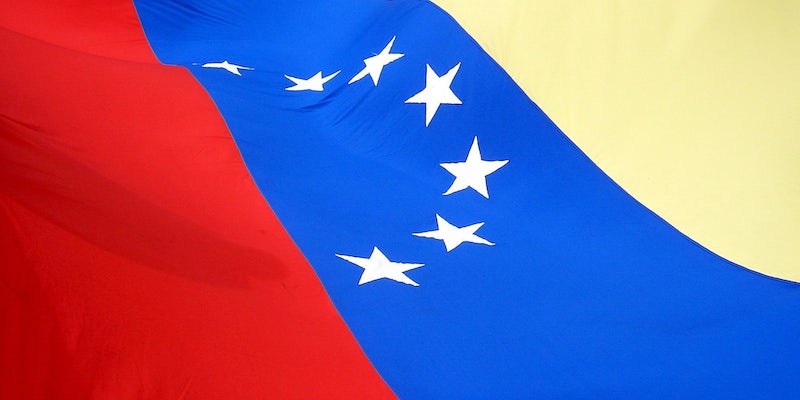 This is no laughing matter.

Having run through their share of opposition figures and journalists, the heirs to late President Hugo Chavez’s governing legacy in the oil-rich, opportunity-poor country of Venezuela are turning to comics.

Stand ups, sketch performers, and TV comedians are all getting shut down, not only because they criticize the leadership of President Nicolas Maduro, but because they do it in a way that evokes the scourge of laughter. If there’s one thing a tyrant can’t abide, it’s laughter.

As Russian literary critic Mikhail Bakhtin pointed out over half a century ago, comedy pulls the gods down off Olympus, and if they can’t stand on their own two feet, they don’t get to go back up. Maduro and the rest of Chavez’s inheritors are wobbling.

According to NPR, comics like Laureano Marquez are seeing their venues eliminated as a firebreak for criticism.

Marquez told NPR “that three of his recent shows were canceled after all three clubs that booked him were suddenly closed down for alleged tax evasion. He’s also been shut out of government-run theaters and hotels.”

One of the unique elements of Venezuelan life is the power of the local political official. If the mayor of a town, or even a large city, is pro-Maduro, they can shut you down by denying you the permit you need to perform. If the mayor belongs to the opposition, you’ll have better luck.

Another comic, Alex Goncalves, said that even when you can perform, the supporters of the government sometimes come after you.

“We have to run to the car and go, like criminals, because these people have no sense of humor,” he told NPR, “and that’s very sad.”

American comics are unsurprisingly siding with their Venezuelan compadres.

The crackdown “indicates there’s an inept leader that doesn’t want anyone to know how many mistakes he’s made or how far reaching, or perhaps he’s had too many mangos to the head to remember that this is how the Nazis started,” Baron Vaughn told the Daily Dot. Vaughn is a comic and actor and the cohost of the podcast Maltin on Movies.

“When it comes to politics, comedians read between the lines and see hypocrisies and half-truths,” said Vaughn. “And we report those things to regular people who go, ‘I noticed that too!’ or ‘You’re right, that doesn’t make sense!'”

Comic and television writer Kevin Avery told the Daily Dot that he doesn’t find the fact that comics are being targeted surprising.

“We are the biggest unfettered mouthpieces there are,” he said.

In addition to stand ups, nationally known TV satirists like the Jon Stewart-like Luis Chataing have been shut down. His Chataing TV was cancelled the day after he mocked Maduro’s claims that he and his staff were planning a coup with a skit featuring his staff cobbling together a revolution using glue, construction paper, and safety scissors.

Finding their public stages restricted, Venezuelan comics are resorting to corporate and private events. That’s the thing Maduro and his crew don’t realize: Comedy is a calling for a hefty percentage of those who do it. You can stamp out a vocation, but not an avocation.

“Comedians are always narrating the story of the people,” said Vaughn. “Always. Whether it’s about milk, or babies, or drones, or sex, or cats, or riots, or sleeping. Or fighting.”

Avery believes it unlikely that comedians in Venezuela will be cowed.

“Comedy is addicting,” he said. “And when you have something you feel compelled to say, that’s an even bigger driving force. What can we do? No one wants to stop laughing.”