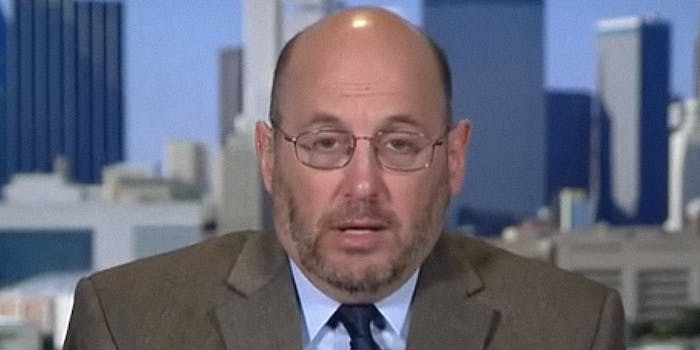 Kurt Eichenwald spent the past week getting owned online

It's been a bad week for the 'New York Times bestselling author.'

Journalist Kurt Eichenwald learned on Tuesday that he was not, contrary to his own belief, a contributing editor to Vanity Fair. The realization was a very public conclusion to a potentially libelous and bitterly hyperpartisan Twitter bout, which the journalist had been drawn into. And the second time in less than a week he had been disaffiliated from a former employer as a result of it.

So, when Eichenwald lashed out at fellow Parkland shooting survivor and pro-gun activist Kyle Kashuv via Twitter on Friday, in a since-deleted tweet that berates the teenager’s followers as “infantile,” Kashuv responded just as Hogg did: by calling on his followers to boycott the sponsors of MSNBC.

MSNBC and @kurteichenwald feels it's okay to attack Parkland survivors. As we know, that calls for a boycott! @smiledirectclub@jeep@proactiv@officedepot@cadillac@trivago@sleepnumber@omahasteaks pic.twitter.com/IIybDEzuRs

Conservatives, seeing a comparative to the Hogg-Ingraham situation, willingly took up the cause. Daily Wire’s editor-in-chief Ben Shapiro, whose website Ingraham had linked to in her tweet two days earlier and who is an outspoken defender of Second Amendment rights, immediately drew a comparison to Hogg’s tactics and declared in an article conservatives were merely “playing by the left’s rules” in protesting Eichenwald’s employers.

Guess it's time for MSNBC's advertisers to pull their ads. Them's the rules, right? pic.twitter.com/bkWCfOrx5W

It didn’t take long before advertisers saying they would withdraw from MSNBC, as they had done with Ingraham.

1/2: We are aware of this incident and have pulled our ads from the network as a result.

By that time, however, Eichenwald had tweeted out a lengthy apologetic thread, claiming he had mistaken Kashuv for another person and crucially admitting that—despite the claim in his Twitter bio—he was not an active contributor to MSNBC. His contract, he said, had expired one month prior.

An MSNBC spokesperson confirmed this to be the case to multiple publications.

For those – like @benshapiro – who are taking my entire situation with @KyleKashuv to push a lie (I thought he was someone else) – stop going after @MSNBC. My contributor contact with them expired more than a month ago. Not with them. Need to edit my profile.

Kashuv accepted Eichenwald’s apology and explanation, following that “mistakes happen” and no one should lose a career over it.

On a more serious note, Kurt: If you made a mistake and you’re truly sorry, apology accepted. We should all be more forgiving — including you (and others) of Laura Ingraham.

When will you and MSNBC do the same for Laura? https://t.co/x8W5mkD85T

This, however, is not where the story ends.

Eichenwald reached out to Shapiro on Tuesday via email accusing Kashuv of “actively working to trick journalists,” working in conspiracy with the conservative media, and being “in desperate need of psychiatric help.”

He claimed to be writing an article alleging that the conservative pundit had a working relationship with the student, saying that a “disturbing” direct message conversation between himself and Kashuv had been analyzed by a medical professional at Eichenwald’s request.

“I consulted a friend of mine who is a psychiatrist—a political conservative, since that seems so important to you—and based on what he read, the psychiatrist said the following,” writes Eichenwald. “Kyle is in desperate need of psychiatric help or support.”

He described Kashuv as “obsessed” with Shapiro.

“Don’t forward this to Kyle,” the email continued, suggestively. “He does not need to know what a psychiatrist is saying about him. You have hurt him enough.”

Eichenwald then followed up, claiming that trolls and followers of Shapiro were sending him flashing GIFs, in order to trigger an epileptic seizure for which Eichenwald threatened to hold the conservative responsible for.

In December 2016, one Twitter user had sent the journalist a strobe GIF which he alleged set off a seizure. The FBI arrested and charged the GIF-poster three months later.

Anyone sending @kurteichenwald strobes is a complete POS. Don't do it, obviously. But blaming me for such nonsense is utterly insane.

Kashuv, loathing Eichenwald’s mischaracterization of his words to Shapiro, passed screenshots of the direct message thread to the Daily Caller who promptly published them.

In the lengthy conversation, the student implores Eichenwald to “hang up the cape and get off Twitter” after blasting the journalist as a “clown” whose apology was an insincere attempt to make himself the victim. Eichenwald responds by accusing “conservatives” and “Bernie Bros” of trying to kill him, using GIF-induced epileptic seizures. Kashuv describes this as “evil” while maintaining that Eichenwald was “begging for five minutes of fame” by continuing to drive his point even after issuing the public apology.

“You have no regard for me and my experience,” Kashuv writes. “And all you’ve show [sic] me is that you are using this story for personal leverage.”

As conservatives responded to the published email thread, which gained mass exposure through Shapiro’s account, many began to demand that Vanity Fair account for its contributing editor’s actions, noting Eichenwald’s email signature, and called for boycott of the magazine’s advertisers.

The messages slandering a teenage school shooting survivor as mentally deranged & admitting to having @KyleKashuv psychoanalyzed *in secret* were sent with a Vanity Fair LOGO at the bottom of the email.

I'm trying to figure out how @VanityFair defends this behavior?

This is a 1,000 worse than anything Ingraham did to Hogg. Where are the media reporters demanding comment from Vanity Fair? https://t.co/LRKuC4tNhx

As media reporters began to reach out to the publication, the Daily Beast quoted a spokesperson who said that Eichenwald did not hold a position on the masthead at all. He has not, in fact, written for the outlet since 2014.

Statement from a Vanity Fair spox: "Kurt Eichenwald is not a contributing editor at Vanity Fair."

Kashuv, and many other confused Twitter users, reacted to the news angrily.

Hmm wow who can you believe here? Vanity Fair or Kurt Eichenwald? pic.twitter.com/dy4rDeAYvz

Eichenwald continued to insist that he was a contributing editor for the publication in a statement to CNN’s senior media correspondent Brian Stetler.

On Tuesday afternoon, amid the escalation in interest around the exchange, Eichenwald tweeted his concession and realization that he no longer held a position at the company.

Hell of a way to find out. I have been a contributing editor – contracted freelancer – with Vanity Fair for 6 years. I live in Dallas & have not been in contact with the new editor in charge. My contract expired and was not renewed. Called my friends there – all of them gone too.

A much deflated Twitter bio, which formerly touted positions at MSNBC and Vanity Fair, now reads “New York Times bestselling author.” It is uncertain whether Eichenwald will continue his investigation into Kashuv and Shapiro or where he plans to publish it.