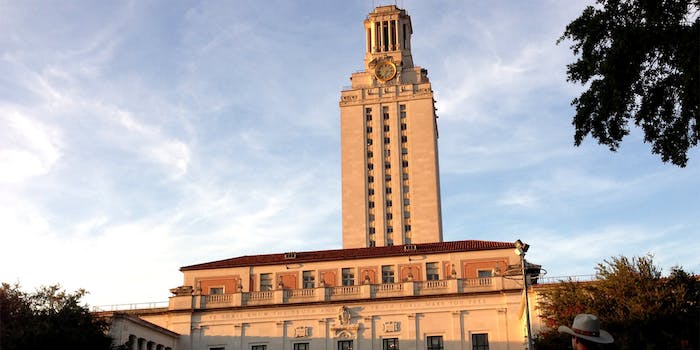 'I'm not very enthusiastic about guns on campus.'

“I’m not very enthusiastic about guns on campus,” Alwyn Barr says over the phone from his home in Lubbock, Texas.

Barr is a 77-year-old retired college professor and the former chairman of the history department at Texas Tech University, former president of the Texas State Historical Association, and a former board member of Humanities Texas, a National Endowment for the Humanities state partner. He’s written or contributed to numerous books and journals on the history of African-Americans in Texas.

Barr received his Ph.D. from the University of Texas in Austin in 1966, the same summer an engineering student climbed to the top of a clock tower on the campus grounds with three rifles, two pistols, and a sawed-off shotgun, and murdered 14 people.

“Looking out from our building that day, the doors to… I guess what’s now called Battle Hall, are recessed back from the outer walls, so you could open the door and look out,” says Barr, who, at 28, was working as a graduate assistant on that fateful day in August, 1966.

“It’s a fake mass shooting. And we’ll use fake blood.”

On Saturday, near the UT campus, pro-gun activists at the Open Carry Walk and Crisis Performance Event plan to simulate a mass shooting. “It’s a fake mass shooting,” Matthew Short, an event organizer told the Austin American-Statesman. “And we’ll use fake blood.” The demonstration comes as a panel of UT students and staff members—the Campus Carry Policy Working Group—drafts recommendations on how to implement a new “campus carry” law, which will go into effect on Aug. 1, 2016—the 50-year anniversary of the UT Tower shooting.

In Texas, universities are allowed to draft campus-specific rules to create gun-free zones, but a law was passed that allows people with concealed weapons permits to carry handguns into dorms and classrooms. UT has yet to institute a gun policy of its own. Hoping to stop gun-free zones from being created, open-carry activists have chosen a “mock shooting” to convince university rule-makers that more guns equals more safety.

The protest comes amid a debate over gun violence that is dominating the national conversation following a mass shooting in San Bernardino, California, that took the lives of 14 people.

Initially scheduled to be held on the UT campus, the protest location was changed Wednesday to an area off Guadalupe Street, which is adjacent to UT. The organizers made the move after UT officials announced that criminal trespassing charges could be pressed against any outside protest group or “theater troupe” that didn’t leave the campus when asked.

“We will move forward with the event on the adjacent public land using UT as the backdrop,” Murdoch Pizgatti, a founder of the gun-rights group, told the Statesman.

In the small hours of Aug 1., 1966, Charles Joseph Whitman travelled to an apartment building on Guadalupe Street, just west of the Texas Capitol building, where he murdered his mother. “I have just taken my mother’s life,” he wrote in a letter found beside her body. “I am very upset over having done it.” Calmly, he then drove roughly two-and-a-half miles to his house and murdered his wife. He wrote in a suicide letter that he was suffering from headaches and “many unusual thoughts.”

She was worried, he remembered, that the baby would grow up without a father

Venturing out once more, Whitman stopped by three shops to purchase an M1 carbine sniper rifle, a 12-gauge shotgun, and several hundred rounds of ammunition, which he later tossed in a foot locker along with an assortment of weapons and supplies. He apparently planned to stay alive for some time, bothering to pack toilet paper, food, and deodorant. Later, he’d use a rented dolly to get the locker inside the university’s main building and into an elevator, which he took to the 27th floor. After bludgeoning a 51-year-old receptionist at the top of the tower and killing her, he barricaded the stairwell and opened fire on two families inside the building with a shotgun, killing a 56-year-old woman and a 16-year-old boy.

Before he pulled the trigger, no one who’d encountered Whitman that morning thought anything suspicious.

At approximately 11:48am, Whitman, a former U.S. Marine, fired his rifle from the outer deck of the observatory at the pedestrians below with “chilling precision,” killing first the unborn child of 18-year-old Claire Wilson with a shot to her abdomen. Thomas Eckman, her fiancé, was hit next, as he knelt by Claire’s side. 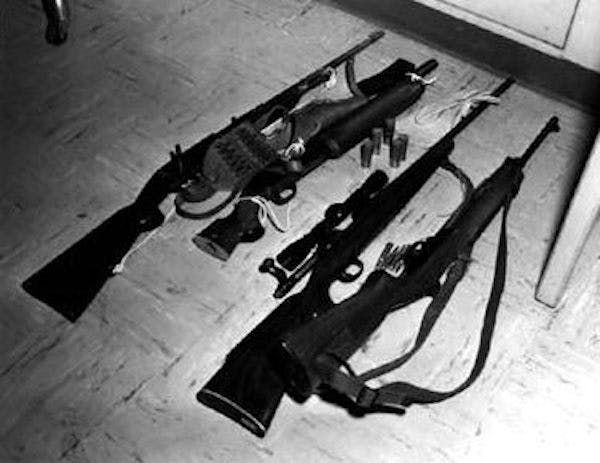 “It was like a battlefield,” Barr tells me. “He was shooting people.”

Off campus that sweltering morning, Barr’s wife, Nancy, was eight months pregnant with their first child, a girl. She was worried, he remembers, that the baby would grow up without a father. “And I was worried she was going to miscarry, or have a premature birth,” he says, “because she was so upset and worried about me.”

“It took a while for highway patrolmen and policemen to finally get up into the tower and stop the guy,” Barr says. In fact, 95 minutes passed before Whitman was shot and killed by an Austin police officer. By then, a total of 16 people had died and 32 more were wounded. Countless other lives were altered forever.

“It seems to me that they’ve gotten most of what they wanted from the legislature.”

“It would have been good if the campus police at the University of Texas in 1966 could have responded more quickly,” says Barr. “And I think every campus needs its own law enforcement body, and they need to be sensitive to the possibilities of this sort of thing happening. They might have saved some lives. That, I think, is important.”

As for students carrying guns on campus or holding “mock shootings” rallies, he remains conflicted.

“I’m not opposed to free speech on the campus,” he says, adding that moving the demonstrators off campus was the right thing for UT. “The general idea, of course, is that a university ought to be a place where you carry on debates and discussion about a variety of topics in the process of learning. But this is such a tricky thing, in the sense that there’s overtones of violence, and the fact that it’s there, at the University of Texas, where violence has taken place,” he says.

“I realize that from their point of view it was a way of attracting attention, but it seems to me that they’ve gotten most of what they wanted from the legislature.”

Barr notes that, while the conservative Texas government is inclined to support the right of students to bear arms, he finds the process of vetting concealed-gun carriers to be problematic. Increasingly, background checks are failing to weed out the wolves from the flock. “The tricky thing, of course, is that they’re checking to see if they have some sort of criminal background. It doesn’t necessarily check their psychological state.” Whitman, he says, had being seeing a psychologist, but it obviously didn’t help.

“Without some way to check on that,” Barr says, “it’s difficult to completely protect people, or even come close to protecting them.”

Photo via Guðsþegn/Wikipedia (CC BY SA 3.0)