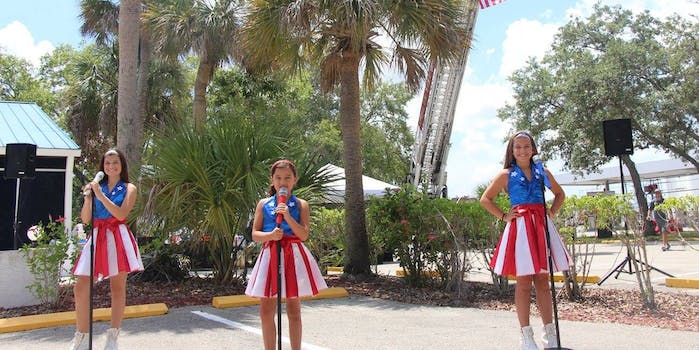 'Deal from strength or get crushed every time.'

When the “USA Freedom Kids” performed at a Donald Trump rally in Pensecola, Florida, they sang, “Deal from strength or get crushed every time.” But this time, the group’s founder says they’re the ones getting crushed.

The Washington Post reports that Jeff Popick, founder of the viral-sensation group plans to sue Trump, the Republican presidential nominee, for not honoring their verbal contract.

“This is not a billion-dollar lawsuit,” Popick told the Post. “I’m doing this because I think they have to do the right thing. And if this means having to go through the court system to enforce them doing the right thing, then that’s what I have to do. I’m not looking to do battle with the Trump campaign, but I have to show my girls that this is the right thing.”

Popick, a former stunt driver and real estate developer, told the Post that the campaign never honored promises to allow the group to sell merchandise at an event in Pensacola in lieu of a $2,500 fee for their performance or perform at a campaign event in Des Moines, Iowa. He says he plans to file the lawsuit in the next few weeks.

Popick’s claims remain unconfirmed. The Trump campaign did not immediately respond to a request for comment.

According to an archive of articles maintained by Mother Jones dubbed “The Trump Files,” which, among other things, recounts Trumps various business deals, shows a history of contentious business maneuvers by the millionaire real estate mogul.

The campaign of Hillary Clinton, Trump’s Democratic rival, recently released a video featuring a businessman who claimed to have been cheated out of $30,000 by Trump’s Taj Mahal. And an NPR fact check of a recent speech by Clinton in Atlantic City, where Trump has a long history, shows ample evidence for the case that Trump’s business dealings have lead to the hardship of more than one business owner.