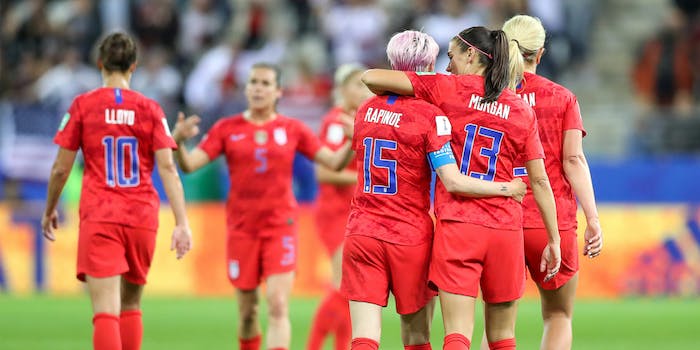 Yesterday, America put on what might be the most impressive performance on the world stage of any country, ever. In their opening match of the 2019 World Cup, the U.S. national team set a record for the most goals ever in a World Cup game, shellacking Thailand 13-0.

It was a thoroughly unbelievable performance, and for 90 minutes, the U.S. was the most dominating force the soccer world had ever seen.

You might think that modern conservative men, the most pompous, bloviating nationalists America’s ever seen, would be all about it. Except that this is the Women’s World Cup, the version of the sport where the men don’t play.

So what wins out: Jingoism or misogyny? Here’s what they all had to say.

Nothing, but he did take time out yesterday to mention how the left hates conservative women.

Nothing, but he hasn’t tweeted in over a week.

Nothing, but he’s Canadian so we can cut him a bit of slack.

Prager University’s Will Witt who once called rape “hilarious“:

Something! But only to bash the women’s desire for equal pay, which totally has to do with inflexible positions on the economics of soccer and not his attitude toward women.

Nobody watches the women’s World Cup and people don’t pay as much money to see it. Advertisers don’t pay as much to have their ads placed. This is not sexist. If you want to see women paid the same as men in sports, tell people to start watching women’s sports. #USWNT https://t.co/cywx2xbt6I

Only to whine about about something that doesn’t affect him.

This is a stupid idea https://t.co/oQZF5iNDNm

Oh well. Maybe they will tune in when the U.S. plays Chile on Sunday.