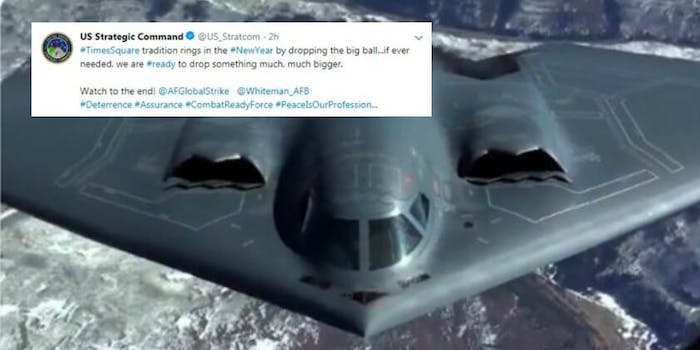 Nothing says 'happy New Year' like a bomb joke.

U.S. Strategic Command has apologized for and deleted a tweet from New Year’s Eve that showed a bomb dropping from a warplane.

U.S. Strategic Command is one of the 10 unified commands of the Department of Defense. It’s responsible for strategic deterrence and global strikes, which includes nuclear weapons. And on New Year’s Eve, it was also responsible for an ill-advised tweet that compared the traditional ball dropping to a bombing. The now-deleted tweet read: “#TimeSquare tradition rings in the #NewYear by dropping the big ball, If ever needed, we are #ready to drop something much, much bigger.”

The tweet was accompanied by a video showing B-2 bombers dropping 30,000-pound “bunker buster” bombs, followed by an explosion.

Later on Monday, U.S. Strategic Command tweeted an apology, acknowledging the tweet was in “poor taste and does not reflect our values.”

A spokesman told NBC News the footage was from a test of non-nuclear bombs.