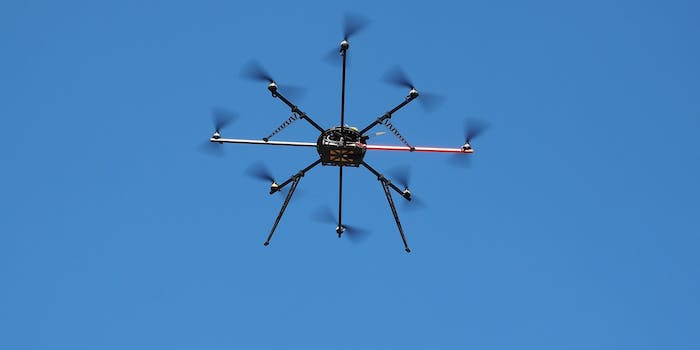 Drone use—and abuse—is on the rise.

The federal government and local police agencies are developing technology to stop drones from accessing security facilities across the United States.

The Department of Homeland Security (DHS), the Department of Defense (DoD), and the Federal Aviation Administration (FAA) are among the national partners in the program, which Reuters first revealed on Thursday.

Coordination with local police included the test of a drone-tracking system in New York City that used microwave sensor to reroute the craft away from a test area, a source told the news agency. That test “ran into difficulty because of interference from nearby media broadcasts,” according to Reuters.

The FAA, which is finalizing rules for commercial drone use, has seen a spike in troubling incidents of drones nearly crashing into airplanes, according to the Washington Post, which disclosed details of several of these incidents after an FAA employee turned over agency records. FAA statistics show that there have been almost 700 near-misses between commercial airline pilots and unmanned aerial vehicles this year. That is already triple the final 2014 figure.

Congress prohibited the FAA from setting restrictions on recreational drones in 2012, but Sen. Chuck Schumer (D-N.Y.) wants to change that by giving the agency new powers to restrict how close they can fly to airports.

It is illegal to fly drones within five miles of an airport or above 400 feet, but that has not stopped hobbyist drone pilots from venturing much further up in crowded airspace, and the government is increasingly concerned about reckless drone flights leading to calamities.

“Efforts to combat rogue drones have gained new urgency due to the sharp rise in drone use and a series of alarming incidents,” Reuters reported.

The Post reported that the Secret Service spotted a drone flying over the Florida golf course where President Barack Obama was vacationing on March 29. And in January, an amateur drone operator accidentally crashed his craft on the White House’s north lawn, triggering a security alert on heavily guarded land that has played host to several embarrassing fence-jumping incidents in recent years.

Drones have caused trouble across a swath of critical operations. They have strayed into the skies near the restricted airspace of U.S. military bases and prevented firefighters from doing their jobs in Southern California.

The slow development of the FAA’s commercial drone rules has frustrated many companies, like Amazon and Google, that want to test new products and services using the small unmanned craft. Google has been using a legal loophole created by its partnership with NASA to flout interim FAA rules, while Amazon received special permission in March to conduct tests outside the interim rules.