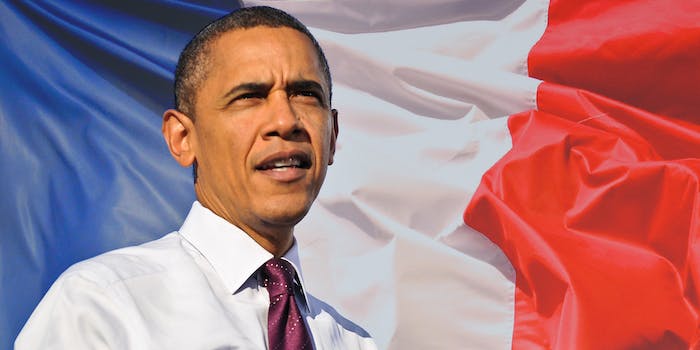 U.S. pledges to give France as much ISIS intelligence as 'allowed by existing law and policy.'

The U.S. has a new plan to help France fight the Islamic State: lots more intelligence.

American military and intelligence services “have decided to bolster our intelligence sharing,” Pentagon Press Secretary Peter Cook said in a statement provided to the Daily Dot.

The U.S. has steadfastly refused to send ground troops to areas ISIS controls, but has conducted steady airstrikes against the terrorist group for more than a year. After a group with ISIS ties killed 129 civilians in Paris on Friday, French President Francois Hollande has said that “France will destroy ISIS,” though it’s not yet clear if France will take aggressive military tactics beyond airstrikes.

Cook said that while the U.S. has shared some intelligence on ISIS with France for more than the past year, Monday marks the start of a much more significant partnership, saying that “Secretary of Defense Ash Carter and Director of National Intelligence Jim Clapper have provided new instructions that will enable U.S. military personnel to more easily share operational planning information and intelligence with our French counterparts… to the fullest extent allowed by existing law and policy.”

It’s not clear exactly what that kind of information can look like. But thanks to documents leaked by National Security Agency whistleblower Edward Snowden, we know that the NSA has some stunningly powerful programs for gathering intelligence around the world. Some, for instance, are able to track practically every phone conversation in a given country. While we’ve yet to see evidence that kind of program is used in Iraq or Syria, where ISIS controls land, it’s believed that the documents show the NSA does use such a program in Afghanistan.

In a speech given Monday at the G-20 Summit in Antalya, Turkey, U.S. President Barack Obama pledged the U.S. would continue its strategy to “degrade and destroy” ISIS.