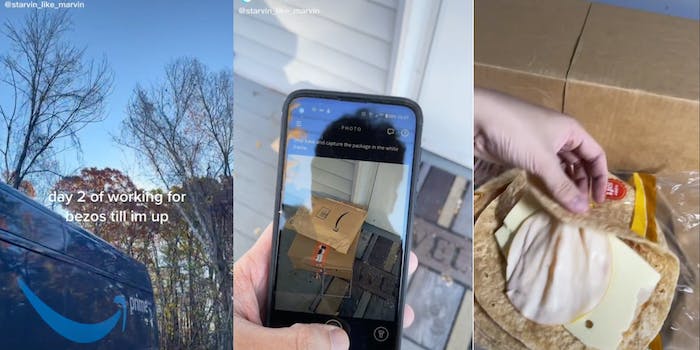 'Delivering to all these nice houses i can only dream of.'

In a new video series, TikToker @starvin_like_marvin documents his days as an Amazon employee who is also experiencing homelessness.

The first video shows @starvin_like_marvin going to a Walmart and picking up ingredients for a sandwich—turkey, tortillas, and cheese—along with a Powerade and apple slices with peanut butter. In total, he said he spent $14.49.

“Day 1 of being homeless Amazon worker till I’m up,” reads the video caption. The video has received over 730,000 views since being posted over the weekend.

In later videos, he drives the Amazon truck to deliver packages and then eats lunch. “[Delivering] to all these nice houses i can only dream of #homeless #broke #grind #money,” he captioned one of the videos.

As of publication, he’s up to his fifth day as an Amazon employee.

In one of his posts, @starvin_like_marvin said he loves his job and that his “company is very nice.” But Amazon warehouse employees have long tried to draw attention to unsafe working conditions there.

@starvin_like_marvin commented on his first video that he’s “sprinting my way up taking all the hours I can to have a better life.” He also thanked his followers for their motivation and encouragement thus far.

“Congrats on your new journey,” wrote one person. “Keep your head up and stay focused and be safe.”

“You can do it bud!” commented a second person. “I was homeless for a year. It gets better, I swear.”

“Stay positive my guy one day at a time,” said a third.

Other commenters also gave him tips on where to get cheaper groceries.

“Go to Aldi my boy,” said one person. “Cheapest groceries ever.”

“Download the Dollar General app and they have deals when it comes to food and essentials,” said another. “My go-to.”

The Daily Dot has reached out to @starvin_like_marvin via TikTok comment.