Apparently the social network would rather you go commando.

Facebook is widely considered the “necessary evil” of its day, but that doesn’t mean we have to like its rules and guidelines: This week, chafed by the social network’s decision to zap some of its photo ads, an underwear company fired back with a trollish post—and won big.

MeUndies.com, you see, has a thing about taking pictures of models in their brand of unmentionables and using these images to attract buyers online. Crazy! The Facebook censors weren’t having it, though, probably because some toplessness was involved. 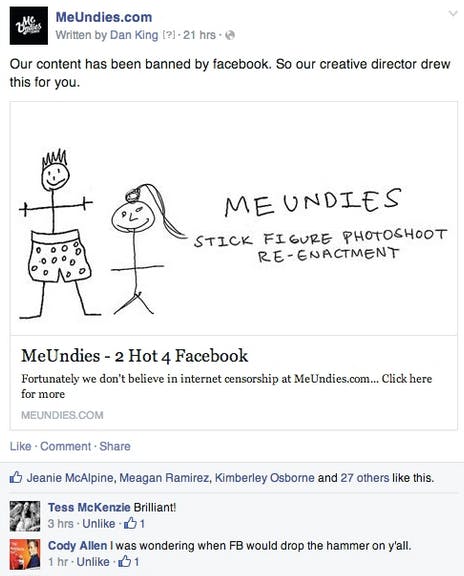 The link, of course, led to the brand’s website, where customers could feast their eyes on the not-quite-NSFW material banned from Facebook. MeUndies explained the move to AllFacebook:

We have become increasingly frustrated with Facebook’s guidelines. We will have ads running for up to one week that perform well with some of our most vanilla imagery, and they eventually get taken down. MeUndies by nature wants to sell underwear, and it’s proven that featuring a product on a human leads to better results. But we are routinely denied, even though these images are tastefully featured prominently on other social media platforms, display networks, and sponsored/native content around the Web. So we found a way to turn this into our advantage, by mocking the Facebook ad medium and enticing users to click to see why our ads have been flagged as inappropriate by Facebook.

That cheeky post seems to have disappeared from the MeUndies.com page, but point made. Now we can sit back and wait for Facebook to flag their current banner image:

Will the Internet ever be safe from artsy catalog photos featuring partial nudity? Not if these beautiful people can help it.