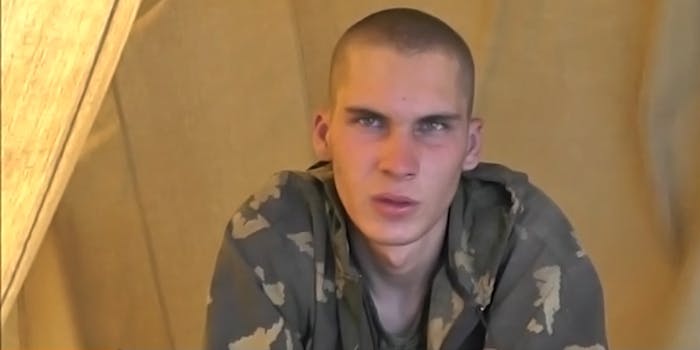 Ukrainian security forces have released a series of videos on YouTube of their interrogation of what they claim to be Russian paratroopers captured in Ukraine. The soldiers’ recorded statements directly contradict the Russian government’s claims that they entered the country by accident.

The four videos appeared online on Tuesday, the same day that Ukrainian president Petro Poroshenko and Russian president Vladimir Putin sat down for a meeting in Belarus. According to the New York Times, the videos have put a strain on talks between the two countries.

Ten Russian paratroopers were captured in eastern Ukrainian territory on Monday, both Russian and Ukrainian authorities have confirmed. The incursion was “accidental,” according to a statement from the Russian Defense Ministry. But the soldiers’ recorded interrogations call the Russian narrative into question.

Below, you can see Artyom Valeryevich Milchakov, a 19-year-old Russian soldier who had recently written on his VKontakte page—the Russian equivalent of Facebook—that he was being sent to “wipe out Maidan,” a reference to the successful Kiev-based popular revolution at odds with Russian separatists in the east. Milchakov does not appear to be injured.

“Do you know that you are now illegally on the territory of Ukraine?” the interrogator asks, according to a translation from the Interpreter Magazine.

“I guessed,” the soldier said, “but I realized it when they began to bomb us.”

“Ah-ha. How did you end up on Ukrainian territory?”

“We went in convoys. Not on the roads but through the fields. I didn’t even see when we crossed the border.”

“But did you know you were going to Ukraine?”

“We knew,” the Russian paratrooper confirmed.

Another soldier, identified as Sergeant Romantsov, said his unit was commanded to change uniforms, disguise their vehicles, and hand over all personal documents and devices before the mission.

“They brainwash us Russians, I’ll tell you that,” Milchakov told the camera, according to a translation by Interpreter. “In fact, everything is different. Not the way they say on television. But we [are] simple guys; they tell us what to do, we do it. We’re coming here like cannon fodder. We don’t know why, or for what reason. That’s it.”

Milchakov then sends love to his family and especially his grandfather, Oleg, who, he says, will take the new of his grandson’s capture hard.

“To the commanders, I would call on you not to hide from soldiers, what’s going on and where we’re going,” Milachakov says. “We’re like blind cats, going along.”

While their accounts vary, each soldier describes being deployed to the Rostov region in southern Russia on a “training exercise” several days prior to their interrogation, before being sent on a “march” along side a column of vehicles with few orders and little understanding of where they were going.

Of course, there’s little use in assigning much solid value to what Milchakov is saying—except to see what message Ukraine wants to send to Russia. He’s a captured soldier put in front of a camera. Like captured American journalist James Foley before him, he could easily have been forced to say anything in order to save his own life or reduce suffering.

H/T The Interpreter | Screengrab via SBU/YouTube