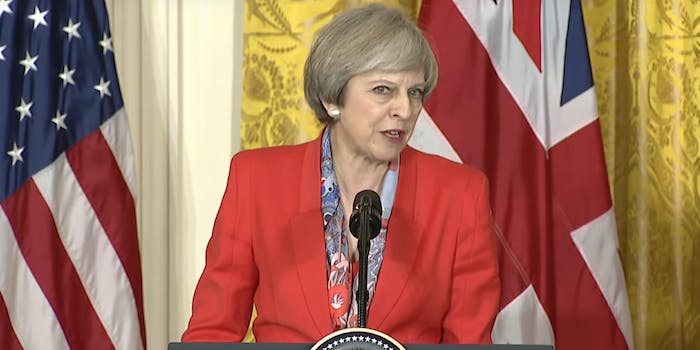 U.K. authorities reportedly became 'outraged' after the leaking of photos to the New York Times.

Authorities in the United Kingdom, one of the United States’ most important allies, are distressed that photos showing debris from the attack were published in the New York Times and the name of the suspected bomber, Salman Abedi, was leaked to the media shortly after the bombing. As a result, U.K. intelligence agencies have stopped sharing information regarding the bombing, the news agency reported.

May said she would talk with President Donald Trump during an upcoming NATO meeting and demand that shared intelligence “remain secure.”

According to the BBC, Home Secretary Amber Rudd was “irritated” by the leak of Abedi’s name and warned the U.S. that “it should not happen again.”

Monday’s bombing left 22 people dead and dozens more injured after an explosive was detonated near the entrance of the Manchester Arena as people began leaving an Ariana Grande concert. Several people have been arrested in connection with the incident, including members of the suspect’s family.

On Wednesday the New York Times published several photographs from the scene of the bombing that appeared to show that the bomber carried an explosive in a metal container concealed by either a black vest or backpack. A possible detonator was also found at the scene, the Times reported.

Other photos published by the Times show blood stains on the floor of the arena and nuts and screws that appeared to be used as shrapnel. A 12-volt battery was also discovered at the scene, according to the Times.

A source told BBC that the leak of the photos was considered to be “on another level” by British intelligence and caused “disbelief and astonishment.”

The U.K. and U.S. are part of the “Five Eyes” that shares intelligence between one another. The other three countries in the agreement are Australia, Canada, and New Zealand.

Greater Manchester Police Chief Constable Ian Hopkins said the leak to the media caused “much distress for families that are already suffering terribly with their loss,” the BBC reported.