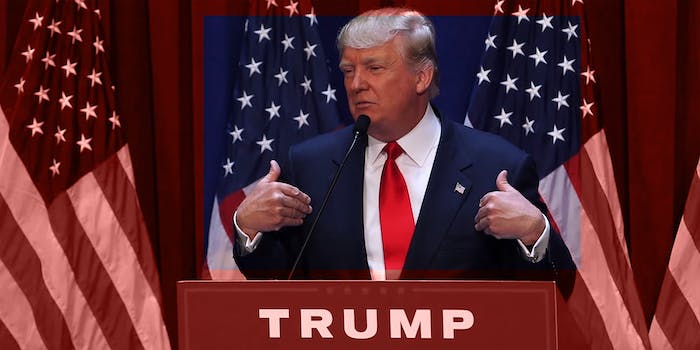 The country has banned other Americans before.

More than 200,000 people have signed a petition asking the British government to ban Donald Trump from the United Kingdom on the grounds that his proposal to ban Muslims entry to the United States qualifies as hate speech.

“The U.K. has banned entry to many individuals for hate speech,” the petition reads. “The same principles should apply to everyone who wishes to enter the U.K. If the United Kingdom is to continue applying the ‘unacceptable behavior’ criteria to those who wish to enter its borders, it must be fairly applied to the rich as well as poor, and the weak as well as powerful.”

Despite the apparent public enthusiasm for shunning Trump, the U.K. government will not ban the GOP presidential frontrunner from the country, the Guardian reports. Chancellor George Osborne said that debating rather than banning Trump was the best way to defeat his views. Others in the government echoed his points.

“The U.K. has banned entry to many individuals for hate speech.”

U.K. free speech laws differ significantly from those in the United States. Hate speech laws, in particular, stand out because the the U.K. put greater limits on acceptable speech and prosecute those who violate laws against expressions of hate.

Insults that cause distress can result in a six month imprisonment or, more often, fines and probation. For foreigners, the laws can mean a ban from the country.

In 2013, the U.K. government barred two prominent American anti-Islam activists, Pamela Geller and Robert Spencer, because their arrival would “not be conducive to the public good.”

In 2015, American rapper Tyler the Creator was banned from entering the U.K. because the government believed that the nature of lyrics he wrote earlier in his career encourages “violence and intolerance of homosexuality” and “fosters hatred with views that seek to provoke others to terrorist acts,” according to the musician’s management.

The selective enforcement of the rules has attracted criticism and, in Tyler’s case, bafflement.

“To say that I am confused would be an understatement,” Tyler’s manager, Christian Clancy wrote. “Can you imagine being beholden to things you said when you were 18? Tyler has been to the U.K. over 20 [times] in the last 5 years without incident.”

Banning prominent bloggers and even famous rappers is one thing but, as the petition points out, banning entry of a multibillionaire businessman and a leading U.S. presidential candidate would be an unprecedented move.