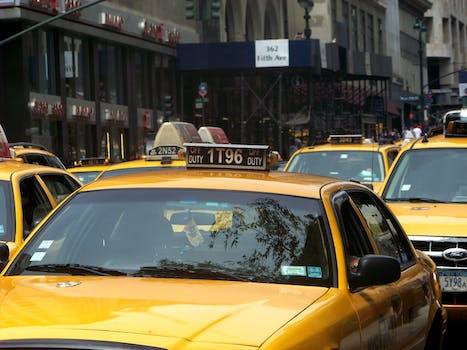 There are more Uber cars than taxis in New York City

New York City’s iconic yellow taxi cab has been overtaken by a sea of black cars.

A new report from the city’s Taxi and Limousine Commission (TLC) finds that there are now more Uber drivers than yellow taxis in NYC’s five boroughs.

The roads in the Big Apple are getting crowded with competition. There are 14,088 black and luxury cars working for Uber, compared to 13,587 canary-colored cabs. Uber’s ascent has been a rapid one; on-demand rides have only been available in the city since May 2011.

Uber’s ubiquity has only made it seem more like the default option, attracting drivers who need to earn a little extra money and passengers who need a cheap, reliable ride. Although Uber has had more than its share of controversies and embarrassments, its reputation as the best option in town somehow persists.

One of Uber’s biggest challenges as it continues to grow will be discrepancies in its claims about driver pay.

The median annual salary for a New York City taxi driver is around $38,000. Uber claims that UberX drivers in the city earn a median salary of $90,766 a year. That claim has been heavily disputed, as it doesn’t account for costs associated with the job like car maintenance, gasoline, insurance, and other expenses.

Data released by Uber in January 2015 showed that NYC Uber drivers make an average of $15 per hour more than their counterparts in yellow cats, although that figure still did not account for various expenses.

“Uber having an unlimited number of cars means no drivers—taxi or black car and livery—will earn a decent living,” Bhairavi Desai, executive director of the New York Taxi Worker’s Alliance, said in a statement. “Incomes for drivers are dropping as much as $5,000 per year.”

New York’s Committee for Taxi Safety has been highly critical of Uber, accusing the company of siphoning revenue from the city. The committee’s executive director, Tweeps Phillips, did not mince words in an op-ed in Crain’s New York. She argued that medallion taxis were at a disadvantage because they had to follow regulations and price controls that didn’t apply to Uber and other ride services.

“There are no regulations to control pricing by taxis’ competitors,” she wrote. “With cute terms such as ‘surge pricing’ or ‘dynamic pricing,’ companies have been able to charge passengers several times more than they’d normally pay.”

Phillips also blamed the TLC for enacting “draconian regulations that doomed any app innovation for the yellow taxi market” while allowing Uber to “run rampant.”

TLC Commissioner Meera Joshi said in recent public testimony that Uber contributes to congestion in the city and that the company, unlike its taxi competitors, doesn’t pay surcharges that fund the Metropolitan Transportation Authority (MTA) and make taxis more handicapped-accessible.

“Uber’s end game is to claim they have the most vehicles,” said Desai. “This means blanketing the industry with part-timers working rush hours, the only time professional, career drivers can earn a living. The city and state need to cap the vehicles in the black car and livery sector, just as taxis and green cabs are.”