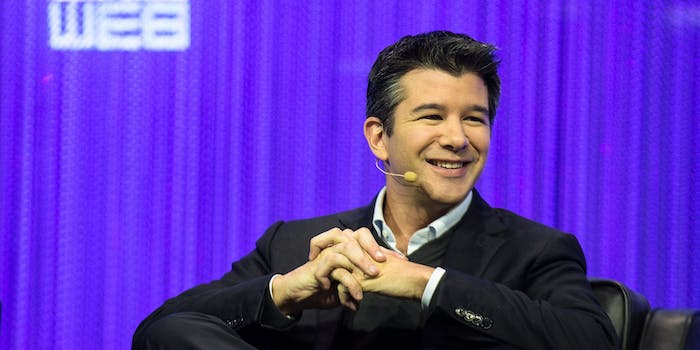 Here's how people who gave the company their money are reacting.

Uber might be the shadiest company in technology. Its most recent corporate blunder, following a smattering of others in the last few months, came to light after one of Uber’s top brass made comments about paying someone to dig up dirt on journalists who write negative press about the company.

Emil Michael, the senior vice president of business at Uber told reporters at a fancy dinner party that the company was considering hiring people to look into the personal lives of journalists in a massive smear campaign.

Michael offered a weak apology to the journalist reportedly targeted. “I would like to apologize to you directly,” he told Pando’s Sarah Lacy on Twitter, though he neglected to use the actual words “I’m sorry.”

@sarahcuda I would like to apologize to you directly. My comments were wrong and I deeply regret them.

Uber CEO Travis Kalanick condemned Michael’s remarks, and said in a tweetstorm the Uber employee demonstrated “a lack of humanity,” but his apology totally made up for it.

Kalanick and Michael weren’t the only ones to react. A handful of Uber’s investors have also commented on the scandal. Ashton Kutcher, celebrity-turned-venture capitalist whose firm A-Grade is an investor in Uber, went on his own tweetstorm wondering publicly what was so bad about Michael’s plans. Kutcher himself clearly doesn’t understand ethics—his site Aplus.com plagarized numerous articles from sites like Buzzfeed and Huffington Post.

To be clear I speak for my self not @Uber

Jason Calacanis, a minor investor in Uber known for his opinions on everything from riots in San Francisco to the hustle of white, male techies, defended Uber in his own series of tweets on Tuesday.

Investor Chris Sacca also called out Uber’s behavior, though he appeared to be satisfied with the apology as well.

1/ Whoa. Been hanging with kids. Came back to find my mentions jammed with people angry at me for Uber stuff.

2/ What @emilmichael was reported to have said was awful. No excuse. None. But I'm encouraged that he recognizes that and is apologizing.

The apology isn’t good enough—yes corporations make mistakes, but when the CEO of a company known for tactics like trying to undermine a rival’s fundraising efforts and supporting a bill that decreases the number of wheelchair-accessible taxi cabs, says someone’s behavior shows a “lack of humanity,” that person needs to be fired.

In fact, it’s just good business sense. Since Uber’s latest unethical tactics were exposed, people have begun deleting the car-hailing application. The #DeleteUber hashtag on Twitter shows just how many people are ditching the company, and Uber community managers are having to do some serious damage control as more people email them to delete accounts.

“Travis, if I were you I would resign and help your company heal,” Scoble wrote in a Facebook post. “This company has deeply wounded itself. The investors should insist that Travis go. Then it should repair its relationship with Sarah Lacy and it should be made clear that being anti journalist or anti woman will not be tolerated at all.”

Uber is one of the most high-profile companies in technology right now, and as both investors and the company refrain from advocating for a massive change in behavior and tactics, they send a message to other startups and corporations that this behavior is entirely acceptable.

But maybe in Silicon Valley, a lack of humanity looks good on a resume.