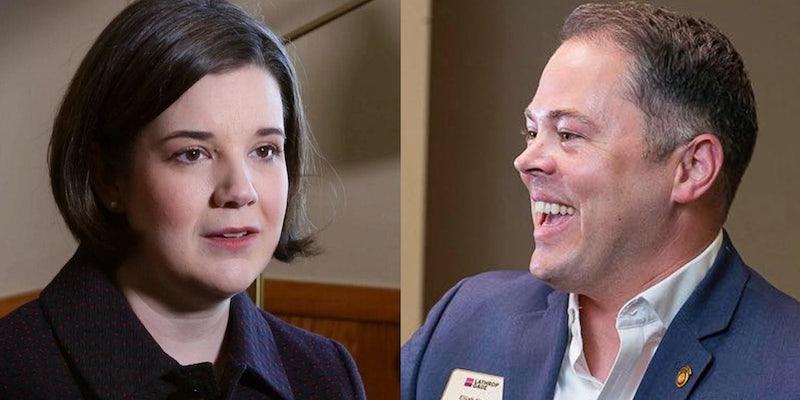 ‘These two were clearly up to something’: Uber driver exposes 2 anti-abortion Republicans for backseat behavior

The lawmaker proposed letting anyone sue a Missourian who helped someone get an abortion.

Over the weekend, an Uber driver took to Twitter to claim they witnessed behavior that contradicts the public persona of a Missouri lawmaker.

The driver claims to have picked up Missouri state Rep. Mary Elizabeth Coleman (R) on a January night in 2020. She said that Coleman was joined by fellow Republican Elijah Haahr, who was then the state Speaker of the House.

Twitter user @annieschulte described a scene that unfolded in the backseat, where the two were holding hands and asked to be dropped off at a bar together.

Coleman, who’s running for state Senate, is best known as an antiabortion hardliner. She’s proposed legislation that would allow people to sue anyone they suspect of helping a Missourian obtain an abortion across state lines. She’s also married and was at the time of this purported Uber ride.

Coleman didn’t respond to a request for comment sent via email Monday morning. She appears to have turned off replies on her most recent tweets after the Twitter thread went viral. The manager of the radio station where Haahr works declined to comment via email. Haahr’s term in the Missouri legislature ended in 2021. It’s not known if he was married at the time of the alleged encounter. He reportedly has four children. Haahr is also vocally anti-abortion.

The Daily Dot didn’t receive responses to inquiries sent via email and Facebook direct message to the business and personal accounts, respectively, of a person matching Twitter user @annieschulte’s name and likeness. Last November, she wrote about working for Uber on Facebook. She’s posted support for Democratic candidates.

“Jefferson City is a sleepy town on Tuesday nights but I signed into my driving app, knowing that I could always count on a few legislators needing a ride home from the bar,” @annieschulte wrote.

Around 11pm she picked up “an unassuming brunette that looked […] like an extra on Falcon Crest.” She said the woman said her name was Mary Elizabeth. @annieschulte said she later identified her as Coleman.

Coleman, she says, asked her to pick up a man just around the corner.

“…[T]here was barely room to swing a dead cat between them—like, they could literally see each other while she waited for an Uber,” @annieschulte wrote.

“These two were clearly up to something.”

As she drove them to a dive bar on the outskirts of town, she said the pair held hands and she could see the man “rubbing [Coleman’s] thigh.” At one point, she wrote, Coleman told her that they were legislators.

The bar was closed, so she drove them to another one, which was also closed. On the third try, they found an open bar and the pair got out. Each of the bars named in @annieschulte’s thread corresponds to the names of bars in Jefferson City, Missouri.

An hour later, @annieschulte said she picked Coleman back up.

“She’s alone again and annoyed, explaining that other legislators were at Sapphire Lounge and it ‘ruined everything.’ She’s ready to go home,” @annieschulte wrote.

On the ride home, she said Coleman called a friend to talk about her evening.

“Mary Elizabeth: Maybe we’re in love. [gushing] It was so romantic—he even held my hand in the Uber!” @annieschulte said Coleman told the friend.

@annieschulte said she spotted Haahr’s photo in the newspaper the next day. She posted screenshots of a text timestamped Jan. 22, 2020 of her purportedly asking a friend who he is.

In the image of the text, @annieschulte wrote, “Without dishing on anyone, I’ll just say that people, especially couples, treat their Uber like a confessional sometimes.”

That might’ve been the end of that. Then the United States Supreme Court overturned Roe v. Wade and @annieschulte read an article about Coleman’s antiabortion crusade in Vanity Fair. In addition to proposing a provision to Missouri law allowing people to sue anyone who helps someone get an abortion, Coleman reportedly wants to make abortifacient drugs illegal in Missouri.

“I precede to learn everything I can about this woman, discovering that she’s currently one of the biggest threats to Missourians—specifically women,” @annieschulte wrote. “As a single mom of three little girls, I decided it was time to speak Mary Elizabeth’s truth.”

The thread went viral. As of this writing, the first tweet has been retweeted more than 12,000 times and liked more than 57,000 times.

Many of the hundreds who commented suggested that the tale casts aspersions on Coleman’s stated values, such as when she told an interviewer her biggest influencer is “first and foremost, Christ. I am not driven by ideology but by faith. It is the backbone of my life.”

“I don’t care if they cheat—that’s between them & their spouse,” said one person of @annieschulte’s claims. “But when they start using ‘Christian values’ and act all ‘holier than thou’ to deny women body autonomy, I’m ALL for exposing their hypocrisy.”

Neither Coleman nor Haahr have publicly commented on the matter.