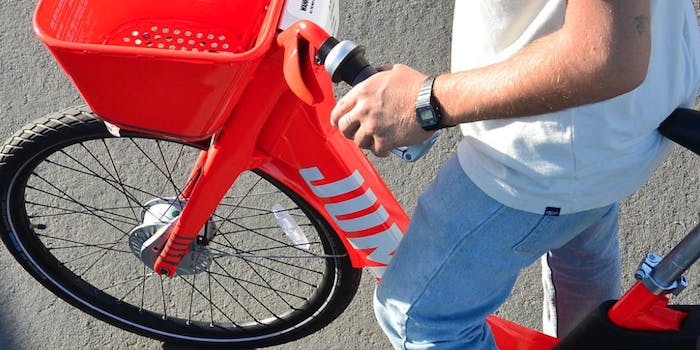 A bike-share service makes a lot of sense for Uber.

While we’ve been hearing a lot about Uber‘s efforts in the self-driving car space lately, the company has another endeavor in the works: Uber Bike, a new bike-share service launching in San Francisco.

Beginning next week, Bay Area Uber users will be able to reserve pedal-assisted e-bikes provided through Jump Bikes. Rides will be significantly cheaper than your usual Uber, on par with other bike-sharing schemes. Uber Bike will cost $2 for the first 30 minutes of bike rental, and $1 for each 15 minutes after that. If you’re interested in joining the service, you can add your name to Uber’s waitlist here. While Uber Bike is debuting in San Francisco first, its site says that it’s coming to other cities soon.

Jump Bikes, the startup Uber has partnered with for bike-sharing, uses dockless, pedal-assisted e-bikes. Attached to the front handlebars is a basket, so you can easily toss in a purse or a bag of groceries. Above the rear wheel is a keypad and a lock. You use the Uber app to locate the nearest bike, which should be locked to a pole or bike rack along a street, and then once reserved, you’re given a PIN code to unlock the bike. From there you ride it, then lock it up and leave it when you’re done. While the bikes are electric-assisted, they top out at 20 mph.

In San Francisco and many other metropolitan areas in the U.S., traffic is worsening. Many blame ride-sharing services like Uber and Lyft for the problem. Getting more cars off the road and getting people to opt for a bike ride instead could help alleviate some of that congestion.

For Uber, Uber Bike is a way for the company to offer “affordable, sustainable transportation to the masses,” according to CNN. It’s also a way for the company to expand its footprint without putting additional drivers and vehicles onto those already clogged roadways. While San Francisco already has Ford GoBikes available across the city for bike-sharing, some may find Uber’s alternative more attractive. Uber’s Jump Bikes are dock-less, so you don’t need to coordinate your route around available docking stations. And, if you’re already an Uber user, payment is simple, done via the app like normal. Ford GoBikes, in contrast, cost $3 per 30 minute trip, $9.95 for an unlimited day pass, and $149 a year for an annual membership. If you’re only making short bike trips on an irregular basis, Uber’s bike renting service may be both more convenient and more affordable.

However, there are some caveats. While Jump Bikes makes it easy to lock up bikes around the city with built-in locks, in practice I’ve seen dock-less bike rentals (such as the LimeBikes deployed in South Lake Tahoe) littering sidewalks. And for those who aren’t used to city riding, there’s a safety element. Navigating taxis, Ubers, and harried drivers can be stressful—and downright dangerous at bike speeds near 20 mph if you don’t know what you’re doing. On its Uber Bike website, Uber does have a section about Bike Safety, which includes advice such as to wear a helmet, “brake early and gradually,” and a reminder to watch out for road hazards such as potholes, puddles, and train tracks. (San Francisco’s MUNI and trolley tracks are a frequent hazard for new or careless cyclists in the city.) However, Uber would do well to remind potential bike riders of other etiquette and safety concerns, such as how to avoid being sideswiped by cars making right turns, and how to ride when car traffic is bumper-to-bumper.

Still, Uber Bike should offer many benefits to those who take advantage of the service. Biking is often faster than walking or taking a traditional Uber, and thanks to Jump Bikes’ electronic assistance, riders will get some exercise but theoretically not so much that they land at their destination drenched in sweat. If Uber tracks bike rider usage and routes, it can potentially use that information to better map routes for car drivers, and in the future, its autonomous cars. (The Daily Dot reached out for comment about this and will update this post if we get further detail.) All in all, Uber Bike should be a good thing for San Francisco—and other cities too, as the service expands.