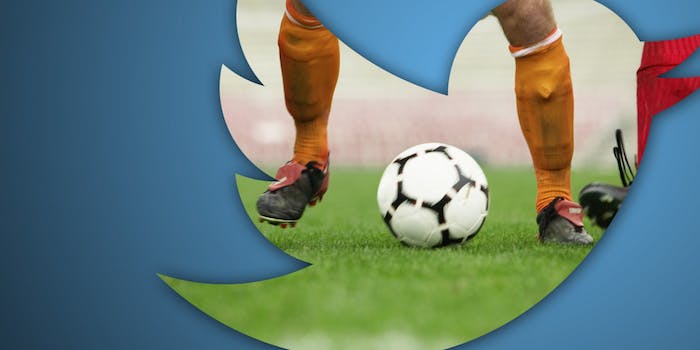 Vine instant replays may soon be a thing of the past.

With the advent of social media, sharing for many has become an almost reflexive act. Seen something cool or exciting? Stick it on Facebook and share it with your friends! The trend can play fast and loose with copyright however, much to the irritation of rightsholders—and now, a major sports body is finally taking action.

The English Premier League’s Director of Communications Dan Johnson has told the BBC that they intend to crack down on unauthorized sharing on goal footage from soccer games. “You can understand that fans see something, they can capture it, they can share it,” Johnson said. “But ultimately it is against the law.”

“I know it sounds as if we’re killjoys but we have to protect our intellectual property.”

Thousands of such clips are shared during any major sporting event, aided by instant replay features built into modern televisions, the BBC reports, and it’s likely that those sharing the videos never even consider that what they’re doing is illegal.

The Premier League takes a dim view of it, however, and its crackdown will include automatic “crawlers”—programs that “crawl” videos looking for infringing content. Similar systems are already in place on YouTube and other major video-sharing sites to combat wide-spread unauthorized sharing. “It’s a breach of copyright and we would discourage fans from doing it,” Johnson told the BBC. “We’re developing technologies like gif crawlers, Vine crawlers, working with Twitter to look to curtail this kind of activity.”

The BBC reports that The Sun’s subscription service Sun+ tries “to get the videos online within two minutes of the ball hitting the back of the net”—but potential customers are unlikely to sign up if the same content can be found on Vine and Twitter faster, for free.

“It’s important to underline that it’s illegal to do this,” said The Sun’s deputy head of sport. “We’ve obviously signed a big deal with the Premier League to be a rights holder and to show it, we’ve got legal teams talking with them about what we can do.”