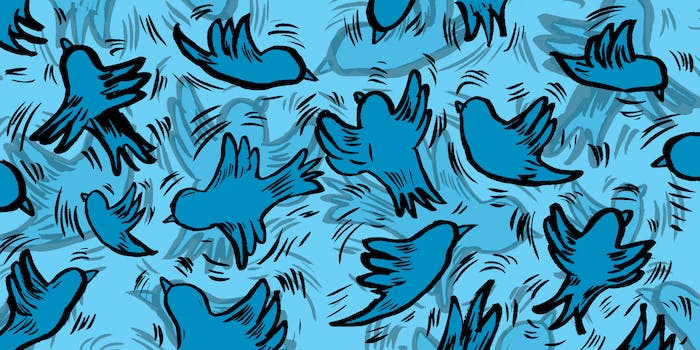 hey Twitter. we've been playing with some rough features to make it feel more conversational here. presence and reply threading. still early and iterating on these ideas. thoughts? pic.twitter.com/3U3NvpHWPy

The proposed features in the screenshots mimic Reddit and Facebook Messenger in many ways: Both platforms have threaded comments (Facebook introduced that feature in March 2013), and the little green online indicator light is very similar to what you’d see on Messenger or Google Hangouts.

The replies to Haider’s post are filled with feedback about the features. At least one commenter actually wants Twitter to go one step further and co-opt another feature from Reddit’s app: the ability to collapse comment threads and skip to the next parent comment. Others expressed concerns about the look and feel of the threads: Common refrains were concerns about too little whitespace and a need for different colors on the reply comments, either for accessibility or aesthetics.

I like the general idea. It seems to loose too much horizontal space on the first indent, putting the image next to the tweet instead of above it. Would seem odd in a tweet with LOTS of replies, too.
The bright blue/purple on your reply…looks highlighted too strongly.

Going back to the point about colour – for people who are colour blind, purple and blue is effectively the same colour…could these colours be made more accessible/there be other options?

More users had concerns about the online status indicator: Some are concerned about privacy, while others just don’t see the point of sharing that data on Twitter, since they use other apps for real-time chat.

I'm fine with the threading but as others have said:
1) Please don't turn this into Facebook. There's a reason I'm here and not on FB.
2) Threads are Tweets that are connected, and should not be treated/displayed as though they are comments.
3) I would disable the status.
Thanks!

(by way of the defaults bit:
Do you think the president will change his defaults? Can you imagine the national security implications of foreign agents knowing when potus is online on twitter?)

Would it be more useful to give an indication of whether a thread/conversation is still alive/fresh, rather than the user’s presence. Tweets aren’t really IMs for me, I’ve got other instant messaging apps.

Twitter’s users have been begging the team for years to implement new features to help curb some of the hate speech and harassment that are rampant on the platform, and this mock-up isn’t exactly that. Indeed, online status lights could subject users to more harassment, not less. But it’s possible these features may never see the light of day:

not really trialing anything yet! we are playing with some ideas but just looking for early feedback right now

If you’d like to share your feedback on the design, Haider stayed active in the thread through Saturday, responding to users who’ve weighed in and soliciting more detail from the knee-jerk “ugh” crowd. The thread has quieted down, but we suspect her little green light would still be on if that feature were live today.