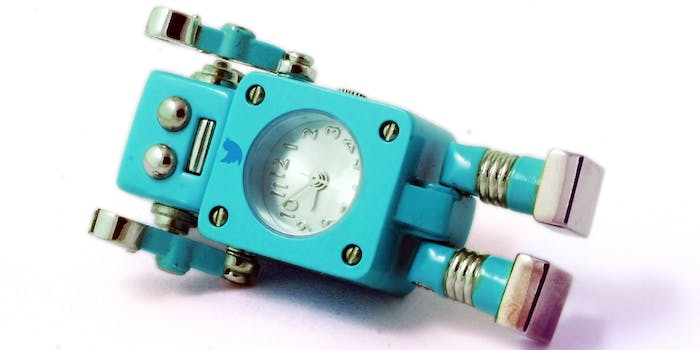 You can now report suspected Russian bots on Twitter

It's part of the company's attempts to clamp down on fake accounts.

Twitter announced Thursday that users can now specify whether they think an account is a bot while reporting suspicious activity.

Activity that attempts to manipulate or disrupt Twitter’s service is not allowed. We remove this when we see it.

You can now specify what type of spam you're seeing when you report, including fake accounts. pic.twitter.com/GN9NKw2Qyn

When reporting a tweet, users can choose an option stating “the account tweeting is fake” after marking it as “suspicious or spam.”

“Activity that attempts to manipulate or disrupt Twitter’s service is not allowed,” Twitter’s statement reads. “We remove this when we see it.”

According to the Verge, a Twitter spokesperson said the new option will help the company axe unwanted content in a more efficient manner.

“The new reporting flow will allow us to collect more detailed information so we can identify and remove spam more effectively,” the spokesperson said. “With more details to review, we’ll be adding more resources to our review processes.”

The change follows Twitter’s announcement last July that it had suspended more than 70 million accounts over a two month period due to malicious activity.

Whether the new feature will be effective, or potentially lead to abuse, remains to be seen. The option is currently available on both the web and mobile versions of Twitter.

The social media company’s decision comes amid growing concerns over the spread of disinformation on social media platforms, specifically in relation to political elections.

After facing congressional pressure, Twitter revealed to U.S. investigators last year that it had found “2,752 accounts controlled by Russian operatives and more than 36,000 bots that tweeted 1.4 million times during the election,” the Washington Post reported at the time.