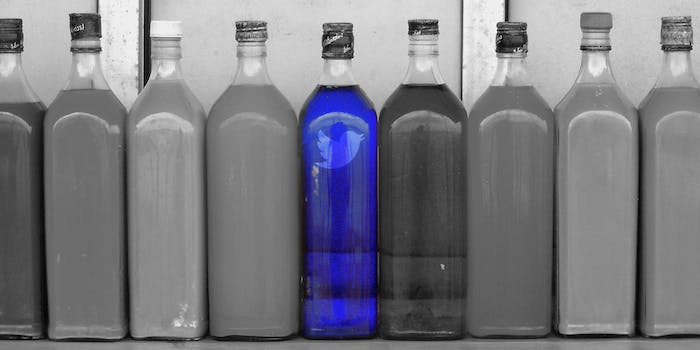 No, Twitter, we don't love using #TwitterForBiz. Now leave us alone so we can stalk our exes' timelines.

Hear that dull, thudding sound? That’s the sound of thousands of social marketers’ heads repeatedly hitting their desks, thanks to a new study from Deutsche Bank about the effectiveness of promoted posts on Twitter. According to the study, more than a third of Twitter users feel that the promoted tweets on the top of their feed are irrelevant, while nearly half of the respondents said they thought the promoted ads were “totally random.”

You got that, social media marketers, “digital prophets,” “Internet-sultan-in-residence,” and other assorted made-up tech titles? Your jobs are both “irrelevant” and “totally random.” Bwahahahaahahahahaha.

(Yes, my high school nemesis has one of these jobs now, what of it?)

The study surveyed more than 1,000 people “who are active on Twitter, have used Twitter but quit, or have never used Twitter” (so basically, everyone in the world). The findings revealed that only a slim percentage of Twitter users (17 percent) found the promoted tweets on their feeds useful, while 48.7 percent thought they were selected at random. 34.2 percent went so far as to say the ads “were not useful” or relevant to them.

Of course, trying to determine the “relevance” of an online ad is a bit like trying to find the plot in an undergraduate film student’s thesis: It ain’t gonna happen. While online ads are presumably tailored to a user’s Internet activity, the purpose of advertising is not so much its “relevance” to the consumer, as its omnipresence.  But the findings of the Deutsche Bank study are of some relevance to Twitter staff members and social marketers, who will have to continue to find increasingly innovative (not to mention annoying) ways to get users’ attention.

In addition to its findings on Twitter advertising, the Deutsche Bank study revealed the most common reasons why users abandoned Twitter. Excessive advertising was only the sixth most common answer, with 60 percent of former Twitter users saying they jumped ship from the platform for that reason. 76 percent responded that there were “too many tweets, and Twitter wasn’t sorting or filtering,” while 77 percent complained “there was no useful information on Twitter.”

Useful information? Polite dialogue presented in an organized and streamlined fashion? What do you guys think this is, Twitter or a Daughters of the American Revolution tea party?