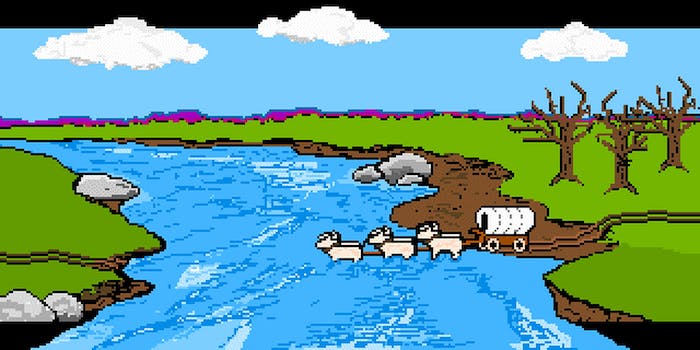 You can now play ‘Oregon Trail’ from inside a tweet

PC gaming in 140 characters or less.

You don’t exactly have to scour the internet to find places to play retro games, but now you might see them in a place you never expected: Twitter. Thanks to the magic of the Internet Archive you can embed a huge number of old school MS-DOS based PC games right into your tweets, and they play just like you remember.

Want to play the grandaddy of the FPS genre from within this tweet? Now you can! https://t.co/MZPNL0Pk7o via @internetarchive

From The Oregon Trail to Wolfenstein 3D, the list of games that can be crammed inside your social network updates is long and full of history.

Be a banker from Boston https://t.co/SfmoY3BqSe

This magical bit of retro gaming nostalgia is made possible thanks to an in-browser MS-DOS emulator that is lightweight enough to fit just about anywhere, including in-tweet link preview field. When you click on a tweet that has been embedded with one of the classic games, all you have to do to begin the fun is click the large power button icon displayed in the center.

Here. Play the original (PC version) of PRINCE OF PERSIA in your browser. See if you can finish in under 30 minutes. https://t.co/kn4T3saQ1L

Controlling the games is done via your keyboard, but there’s not an easy way to actually view the keybinds from within a tweet. The enter, spacebar, control, shift, and arrow keys are typically your best bets if you’re going in blind, so jump in and enjoy a gaming flashback.