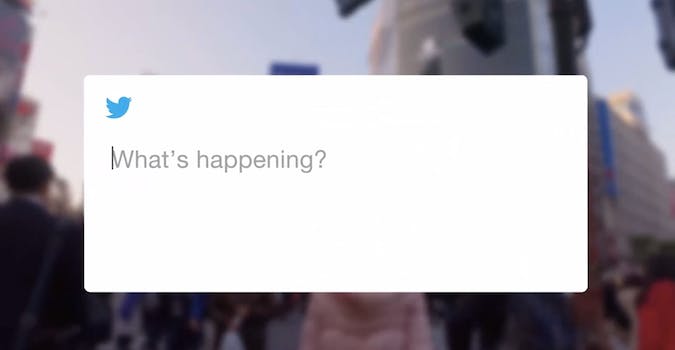 But will it work?

People apparently still don’t know why they should use Twitter, as evidenced by Twitter’s stagnating growth and recent changes to make it more approachable to new users. To help you get the point, Twitter rolled out an advertising campaign that attempts to educate the uninitiated.

Twitter’s research found that while 90 percent of people around the world recognize the Twitter brand, many people don’t actually understand why they should use it. Some thought Twitter was a social network to connect with friends and family, and they felt pressured to tweet daily, the company said in a blog post.

The campaign, launched on Monday, emphasizes “What’s happening?”. Twitter wants you to know it’s a place to find out what’s going on in the world in real-time; discover and follow different people and ideas; and be a part of conversations that impact your communities.

The general public’s misunderstanding of Twitter is an ongoing issue for the company. When the platform amplified the Arab Spring, the Olympics, #BlackLivesMatter, election insanity, and Super Bowl after Super Bowl, people continued to be perplexed. Twitter’s previous elevator pitch, “a global town square,” apparently failed to appeal to new users, and its frequently modified tagline illustrates the company’s vague positioning.

Twitter has a bit of a steep learning curve, and it can be intimidating for newbies. However, the extent to which people allegedly can’t grasp the service is puzzling, because tweets are embedded in media, mentioned in advertisements and pop culture, and become trending topics on Facebook (days after they blow up on Twitter).

Twitter is home to stories and voices that often go unheard elsewhere. Yet despite all the press and organic attention it receives, Twitter struggles to tell its own story.

Users created the things that make Twitter a unique social platform, from hashtags to retweets to the trending events that become the laurels Twitter rests upon. When Twitter takes away people’s creativity and ability to make things on Twitter—like restrictive APIs and failed developer relations that CEO Jack Dorsey apologized for—the platform suffers.

It’s the creativity and opportunity people have to express themselves on Twitter that makes it great. Yes, that means current events and what’s going on in the world, but that also means music, art, humor, video, short-form writing and acting, and memes. These things are generated organically without fitting into a particular structure that Twitter tries to market.

But when you broadcast yourself to the world, you can get attention from other people using the service for other things Twitter doesn’t include in its marketing.

Twitter is a place for global voices that has a reputation for failing to address the toxic harassment people face on a regular basis. These two narratives coexist, and are what much of the public understands about the platform. Because while Twitter might not tell its own story in a way that’s convincing enough for people to join it, users tell their own stories about Twitter that might do the opposite.

When actress and comedian Leslie Jones was harassed to the point of temporarily leaving Twitter, Black women said her interactions were not unique—they’re experienced every day. Harassment is “What’s Happening?” on Twitter.

For years, people have told the company it needs better tools to deal with abuse and support those voices it relies on to tell the stories of the world. Twitter can inform you, and it can ruin your internet experience. The question new users must ask themselves: Is it worth potentially getting harassed to follow and share things I care about?

The company’s inability to effectively control the narrative is its Achilles’ heel. In the coming weeks, Twitter will double down on telling its own story, focusing largely on current events and popular trends people are talking about. Big picture, this makes sense. But on an individual level, people might look at this narrative and see a group of people who are driving conversations around the world, not a community unique to their interests and ideas that’s accepting new members.

Twitter doesn’t just have one story. Maybe it should listen a bit more to the voices telling theirs.