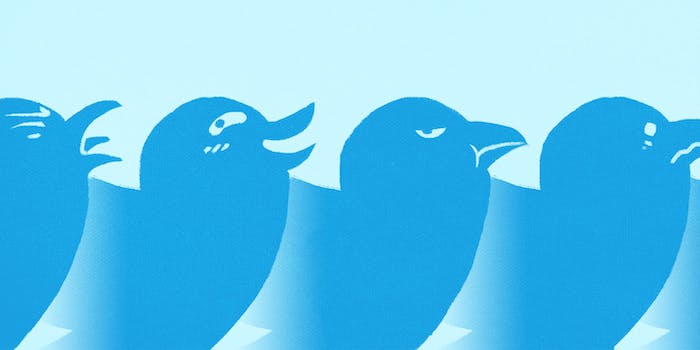 How to survive Twitter’s awkward moments

Let's break down those horribly uncomfortable exchanges that didn't exist nine years ago.

I followed a random stranger without looking at his Twitter feed, and only after I clicked the follow button did I realize he tweets about Crossfit. But I couldn’t unfollow him right away, because he might notice, so instead I just embraced the awkwardness of the moment and will anticipate Crossfit news in my Twitter feed until it’s appropriate to unfollow.

This was my actual stream of consciousness a few days ago—a jumble of trivial nonsense that would never have existed a few years ago. As our communication dynamics change, so too do awkward moments. It might feel ridiculous to actually vocalize such incidents, but the fact they require explanation validates them.

You know them when they happen: The Twitter situations that makes you cringe.

When you subtweet and they notice

You know when an account is clearly talking about someone or something else without linking to or mentioning the particular person? That’s a subtweet. And it’s super awkward when you subtweet someone and they totally notice.

It feels a bit like when gossiping about people in high school behind their backs, and then they show up three seconds later next to your locker.

Unless you don’t care if the subject of your tweets realizes you’re talking about them, it’s probably smart not to subtweet. As the kids these days say, “It’s not a good look.” It is, however, quite exciting to call someone out on it, and see if they respond.

When someone slides into your DMs

Me tryna slide into yo dm’s https://t.co/DA0lYmPZPN

Sliding into DMs is the equivalent of just “happening to cruise by the mall” when you heard your crush started working at Orange Julius. Usually people use the phrase “slid in to her DM” to describe someone on Twitter messaging them privately and trying to take an Internet relationship to the next level. Often it’s as harmless as commenting on a previous tweet, but sometimes the conversation can get a little awkward and tricky.

Luckily there are options, including blocking and muting. Most people can’t DM someone unless they’re following them, so that’s the quickest way to get the thirsty randos out of your private messages.

We’ve all done it—scrolled through someone’s timeline and accidentally tapped the star with our fat thumbs. Good news is that you can unfavorite just as easily. But they might’ve already received a notification that you did so, and unfavoriting will signal that you’ve thought entirely too much about it.

Sometimes a favorite is just a favorite, and as embarrassing as it may be, it’s easier to just let it go. Pretend it was real, and move along.

The RT without reading

Even though people say “RTs are not endorsements,” it’s easy to conflate things that you tweet with your actual ideologies. And if you retweet something based on an article commentary without reading the actual thing first, it creates a jumbled mess of misinterpretations.

The best way is to just un-retweet, and tweet the same article again with your own commentary attached. And remember that despite what the Internet might think, RTs really are not endorsements.

Whether or not you should block someone versus simply muting them is one of the biggest questions of our time. If you mute someone, they won’t appear in your mentions or direct messages, but they can still see you. If you block them, they can’t see anything, and they know they are blocked. So what do you do when you don’t want someone to follow your tweets but don’t feel like dealing with the b-word?

Simply block and unblock so it forces them to unfollow you, and then mute them forever and rest easy knowing your @ mentions will be a little less lame.

There is perhaps no greater frustration on Twitter than being roped into a multi-person conversation of @ replies with no end in sight. I’m quite guilty of annoying friends on Twitter until they’re forced to tell us all to stop, and, per etiquette, we remove them from the conversation. But if people are ignoring your pleas, it’s best to just mute and get it over with. Or hit up that Do Not Disturb option on your phone and ignore away.