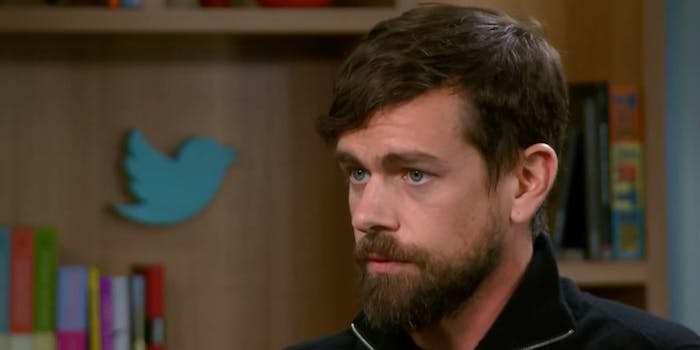 A lot of right-wing voices think they are being censored on social media.

Officials from Twitter and Facebook recently met with prominent Republicans to try and mend fences as right-wing users of the social media platforms—and even lawmakers—have accused the companies of having biases and censoring conservative voices, according to a new report.

The social media companies have had “secret dinners with conservative media elite” and “private meetings with the Republican National Committee,” in recent months, according to the Washington Post.

Jack Dorsey, the CEO of Twitter, met with prominent conservatives last week—including aides to President Donald Trump—at a restaurant in Washington D.C., according to the report. Facebook also sent officials to meet with the RNC to talk about a supposed bias.

The attempt to assuage conservatives comes as right-wing users of social media continue to claim that their content is being silenced by Silicon Valley.

Earlier this year, the conservative YouTube duo Diamond and Silk testified before Congress about an alleged bias against conservative-leaning pages on Facebook. Shortly before their testimony, Sen. Ted Cruz (R-Tx.) grilled Facebook CEO Mark Zuckerberg about their content and supposed bias at the social media giant, essentially summing up much of the criticism among right-wing users.

During the exchange with Zuckerberg, Cruz said Facebook “routinely suppressed conservative stories from trending news” and rattled off a list of what he believed were abuses by Facebook.

Similarly, in February, Twitter conservatives complained that they lost hundreds of thousands of followers—using the hashtag #TwitterLockout—after the company appeared to purge accounts that indicated “automated activity.”