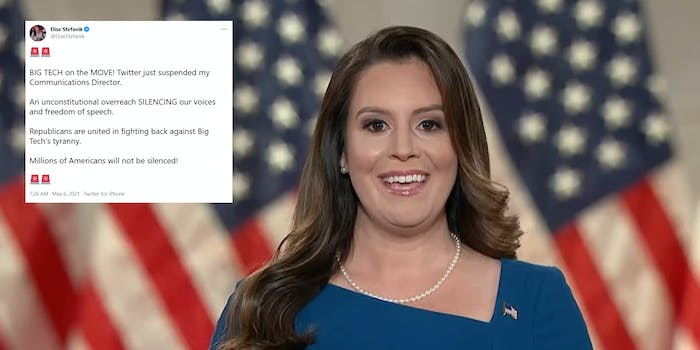 Rep. Elise Stefanik (R-N.Y.) complained on Thursday morning that Twitter suspending her communications director was “silencing” conservatives, but the social media company later said the suspension was just an error.

Stefanik, who has been in the spotlight recently as a potential replacement for Rep. Liz Cheney (R-Wy.) as the third-ranked Republican member in the House of Representatives, tweeted that her communications director, Karoline Leavitt, had her account suspended.

To Stefanik, it was an example of perceived bias by social media companies against conservatives, a belief that has long been held and was consistently pushed by former President Donald Trump.

The “bias against conservatives” argument has fueled Republicans’ tech agenda in Congress, with much of the scorn being directed at big tech companies and Section 230 of the Communications Decency Act.

“BIG TECH on the MOVE! Twitter just suspended my Communications Director. An unconstitutional overreach SILENCING our voices and freedom of speech. Republicans are united in fighting back against Big Tech’s tyranny. Millions of Americans will not be silenced!,” Stefanik tweeted along with several siren emojis.

“The account was suspended in error. This has been reversed, and the account has been reinstated. The account’s followers will take 24-48 hours to fully restore,” the Twitter spokesperson said.

Leavitt previously worked in the Trump administration as an assistant press secretary before joining Stefanik’s staff. It’s unclear what tweet or action may have resulted in the accidental suspension.

Trump backed Stefanik’s push to move up the GOP ranks in the House, endorsing her on his blog on Wednesday.